I recently heard about a church-sponsored trip across the South, visiting a whole chain of Civil Rights museums and places where important events occurred in the struggle for black equality. Pondering how the racial justice crowd clings to the Old Days while here in 2021, black men are being shot in massive numbers by other black men and how black women are getting smacked around since no fathers or husbands are there to protect them, an analogy hit me like a ton of bricks this morning.

They're playing out the movie Sunset Boulevard.

Sunset Boulevard is a film from 1950. William Holden is a writer who needs money and Gloria Swanson plays Norma Desmond, an actress from the silent era who clings to the glories of the past. Decades have passed since the silents were shown in theaters, great art has been created, movie technologies have made leaps and bounds, but Norma can only see the distant past. Those were real stars. Those were the great movies. You'll see. They're going to make a comeback.

Integrating lunch counters in Mississippi was the real struggle. Like Norma Desmond's old movies, it's still going on in the minds of the racial justice crowd.

Meanwhile, the world outside keeps turning and cares not a whit for the silent movies of 60 years ago.

(I)t simply cannot be disputed that the prevalence of unjust killing and violence in the Twin Cities area has vastly increased since last summer’s protests and riots. Minneapolis recorded its second-most homicides ever in 2020 — after only 1995, when the city was ignobly dubbed “Murderapolis” in national media. And the trend has continued to escalate in 2021: between January 1 and April 25, the number of homicides increased by 92% compared to the same period in 2020. More than 80% of the shooting victims in 2020 were black.

“We’re gonna blow Murderopolis off the charts this year,” one Minneapolis cop told me...

The situation is roughly the same in Saint Paul, which tied its all-time record for homicides in 2020. This year, it is on pace to break that record comfortably. The latest homicide was on Sunday night; a man was shot and killed outside a bar in an apparent carjacking. I visited the bar the following day and there was hardly any sign something was amiss — the manager only insisted that the killing had nothing to do with the bar. (Carjackings in the area have surged to an astronomical degree, as I can personally attest.)

This is just the tip of the iceberg. I would bet my bottom dollar that black girls in the hood are getting thrashed at record rates. Meanwhile, the silent movie crowd is telling black girls that Cardi B is the model for a strong, black woman and only far-right white supremacists thought Cuties was degenerate. 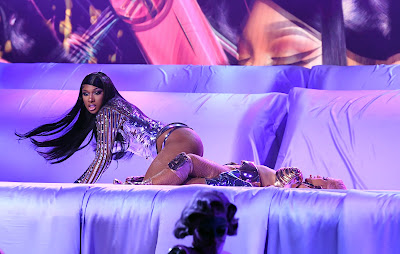 I'll stop here because I'm sure you not only get the point, but can find dozens more examples with almost no effort using less than 90 seconds of Interweb clickery.

I'll leave you with a look into what the civil rights tour will be like.