God And The Holocaust

So somehow, I managed to get teased into a conversation with an atheist today on Twitter. It was the usual stuff, snarky and devoid of intellectual content. I was supposed to be scandalized and perplexed and God knows what else by his rapier-like wit. Whatever. One of the hilarious jabs he threw at me was this image which was promptly retweeted and liked by all kinds of his fellow travelers. 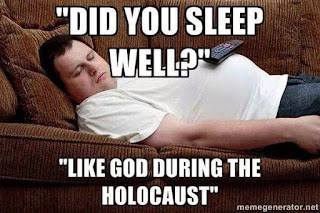 I'd never thought much about it before, but when I saw it a bunch of things went through my head which I will attempt to synthesize here. I'm a fan of Third Reich military history and I've recently been slogging my way through the ghastly Mein Kampf. Given that foundation, when I was confronted by this brilliant repartee, I mildly wondered, "Why was the Holocaust God's to stop?"

Hitler wrote Mein Kampf long before he came to power. Anyone who read it knew he was trouble from the get-go for Jews in particular and Europe in general. Never one for subtleties, while he doesn't lay out the blueprints for the gas chambers, it's hard to see how it all ends well for the Jews. When he finally did seize power in Germany, the sequence of events, including Kristallnacht, made it clear to everyone where this was headed.

Germany wasn't a military super power in the mid-30s. Had the British or French decided enough of this Nazi nonsense was enough, they could easily have whacked Hitler and replaced him with someone less offensive. Sure, it would have been messy, but in retrospect, it's impossible to see how Londoners hiding in the subways during the Blitz wouldn't have wished that Her Majesty's government had snuffed out the little creep years earlier.

Instead, England and France clung to their "right side of history" rubbish and America slept through the whole thing. And after everyone finally managed to rouse their lazy butts after wake up calls in the form of HE-111s bombing the living daylights out of European cities across the Continent, we eventually took out the twit and his goons. Meanwhile, in the Holocaust referenced in that genius image, millions of Jews were gassed because earlier we couldn't be bothered to read and understand Hitler's book and see where the whole thing was going.

"Why was the Holocaust God's to stop?"

Well, I think this raises the whole question of what one thinks that God's relationship with humanity actually is, doesn't it?

If you are picturing God as a parent, then a parent would certainly stop one child from murdering another, regardless of whether or not their other kids were doing anything about it. They would scold and punish the other kids afterwards, but they wouldn't wait until after the murder had been committed if they could help it. So it doesn't look like a parential relationship. Same if you picture God as something like a pet owner, or a farmer with livestock, only more so - in that case, you wouldn't even *expect* the other animals to defend the one being attacked.

I can picture the owners of, say, fighting cocks treating their chickens that way, with the idea that the best fighters will win out in the end, but somehow I don't think that is the relationship you picture God as having with humanity, either.

So, what does he want with us, that would be consistent with letting us consistently slug things out amongst ourselves without intervention?

Where would you draw the line as God and still have free will? Do you intervene when some dingus loses his car keys, or does it take a Rwanda-size massacre to get you to intervene? And once you do intervene, then all the free will evaporates. No more faith, no more discussion, no more any of that. If God intervened like that, I would expect us all to become dogmatic theocrats, constantly trying to live in rigid obedience His rules. How boring!

Instead, I see life as an adventure, set in motion and subtly guided by Him. Yep, sometimes the dice come up snake eyes and you get Down's Syndrome or are born in North Korea, but dealing with those problems is our job and He told us that over and over to the point of providing His Son as an example.

That's OK as far as it goes, and is pretty much the line you have to take to account for both having a God, and having the world look the way it does, but that isn't my actual question. Let me restate it:

Why is unfettered exercise of our free will so important to God? What is it that he ultimately wants from humanity as a whole, that makes interfering with our free will in any way such anathema to him? What does he hope for us to become, and why does he want it?

Why is unfettered exercise of our free will so important to God?

Because without free will, we're not us. We're meat puppets.

You're familiar with the curse of helicopter parents, who cannot allow their children to do anything wrong? Imagine one that can see what you're thinking-- and has the power to make you think only right, and will use it.

I believe that is called "horror."

From another angle-- why on earth would this "you will not be allowed to do wrong" parent decide to stop only those who are killing?

Why not any other active wrongs, like rape, or making others feel bad?

If they will act to stop you from doing things that are wrong, why would they let you not do things when that failure would be wrong, or-- to take a popular line in the sand-- cause harm?
You will call your mother, every Sunday, and talk to her, pleasantly, for two hours. Because not doing it would make her depressed, cause her to become ill, and die of pneumonia.

Of course, it's not you choosing to do this, it's the you-are-unable-to-do-wrong god making you do it, so it's rather all ashes and dust because you didn't choose to do it.
Like the old song says, what's love got to do with it....

Tim, I'd say what He wants is love. See this. There is no such thing as love without free will, without trials, without pain, not love for God, love for your wife or love for the poor.