So Now They Tell Me

I've been growing a bunch of plants from seed. Or at least I've been trying to. I've blogged about them in a very tiresome fashion. That part didn't need so much trying. My blogging can be quite tiresome on its own.

In any case, when I bought the flats for the seeds, I didn't notice that there were two types of flats. One with holes on the bottom and one without. I also didn't bother to read about germinating seeds. How hard could it be? You plant the seeds and water them. They come up. It happens all the time. That's how my old lawn got filled with crabgrass.

What a joke. That's not the way it works at all.

Only a dummy buys the flats with holes in the bottom. You want the flats without holes because you water the sprouts from the bottom, not the top. When you water them from the top, you beat them down they way Mike Tyson would get stomped in a bar fight with an old lady. Diane's Seeds has the details. BlossomSwap has the experts on line to fill in any details.

Incidentally, Diane could teach lessons in customer service. I bought seeds from her and she sent a nice email to let me know they were on their way and has corresponded with me since. Maybe she thinks I'm in prison or something. It's probably some charity thing she does for her church. My landscaping looks like a prison exercise yard so she's not far off.

Man, that went on for a long time. I told you I could be tiresome. But did you listen? No. You kept reading, didn't you? Well, here's where I throw in a photo of my mashed sprouts. I need to start fertilizing them, too. I'll stop writing now and show pictures. 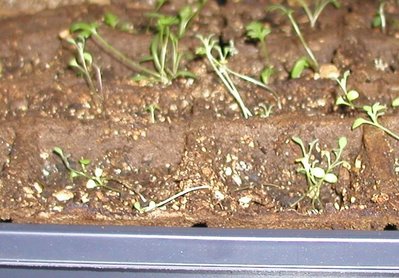 Gold Dust Alysums crushed by torrents of water.
Just to salve my ego and prove I can get it right once in a while, here's a Gerber Daisy I raised from seed I harvested myself. She's a daughter of a plant given to me by friends.