Bless me Father, for I have sinned. It's been two weeks since I WOGged.

I missed last week's World of Good (WOG) because of mad cow disease, vampire attacks, low biorhythms or just general ennui. I can't remember which. In any case, we're back with another WOG, inspired by our blogging partner, Jacob the Syrian Hamster and a lady in New York who rescues his relatives.

In a recent Wall Street Journal article, we discovered New York Hamster House. It's a facility that tends to the needs of abandoned and unwanted hamsters. It's run by Jessica Wells who got her start when she noticed one of the little furries running loose in the street. A tenderhearted person by nature, she scooped him up and a new animal rescue facility was born. Here's her story.

The New York Hamster House was founded in June 2005 by Jessica Wells and Kaiser Wilhelm Hamster as a not-for-profit shelter for homeless hamsters in the New York City area. Wilhelm, the first guest, was found running across Broadway at Thayer Street in Inwood. Since then, the NYHH has taken in over 75 homeless animals, and has placed more than 35 in happy, safe forever homes. We shelter, adopt out, and board hamsters (as well as gerbils and mice).

The Kaiser himself, in all his glory.
Jessica also has a blog.

She's not alone. With a little gumshoe work, you can find a whole community of animal rescue bloggers. People who donate their time to the cause of saving both wild and domesticated creatures. Some travel great distances to volunteer their time to save rare and endangered creatures during natural and man-made disasters. Others are right near you, working with abandoned pets and local wildlife. Let's meet a few of them.

The International Fund for Animal Welfare has an animal rescue blog. As of this post, they had traveled to Indonesia to help rescue Orangutans who were injured or displaced by a large, man-made forest fire. It makes for some amazing reading. Here's part of their latest post.

...two rescuers had found two orangutans, one adult female and one juvenile (high up in a tree)...The tranquilizer gun shot once, then twice, three, four, and then five, finally! The female, sitting in the only tall tree standing high in the area began to get sleepy...These two rescue team members climbed about 100ft straight up, with no branches to rest on, to allow the female orangutan to have an easy fall to the bottom. 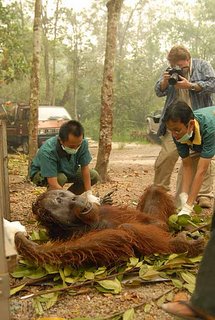 An Indonesian orangutan saved from the fires.
Over at the Blog Pound, Leigh-Ann takes in foster kittens. She also posts frequently in support of animal adoption. 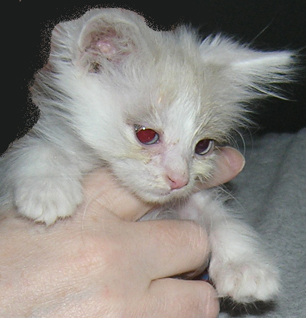 Anyone who takes in unwanted kittens is OK in my book.
Aimee's Animals helps people adopt rescued pets. Like this one. 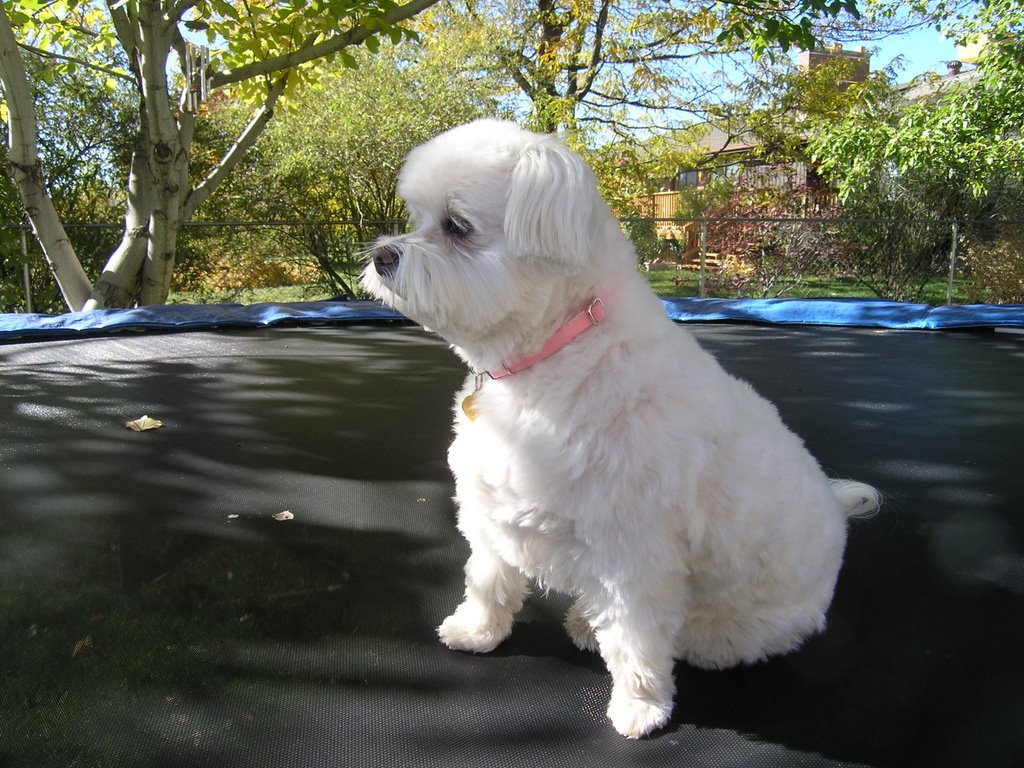 Yes, I know it's a dog. Dogs are horrible things. In spite of that, we can't just have them put down. If we did that, we'd have nothing to use as a comparison to prove that cats are superior.
There are many, many more to find. Everywhere you look, people are donating their time to charitable causes, be it animal rescue like these folks or the other causes we've shown in previous WOGs. To borrow from Dr. Seuss, "From near to far, from here to there, the World of Good is everywhere!"

For more WOG posts and a description of why we WOG, visit this post.
Posted by K T Cat at 8:51 AM

Thanks for spreading the word about rescue! :)

That is one fluffy hamster!

IFAW appreciates and thanks you for mentioning the orangutan rescue story. Stay tuned and take care!

Found you by accident and just wanted to say hi, since I was here:) I am always happy to find a blog about rescue. I like cats and hamsters also:)