In the last week we've had a local raccoon invade our house three times. Once while I was on travel, he got in through the cat door, knocked over the bin of KT's food and feasted. My neighbor who was taking care of our Maximum Leader thought she had done it. I thought this unlikely, but didn't worry much more about it. Yesterday morning I came downstairs and found trashcans tipped over throughout the house, muddy paw prints all over the place and Jacob's cage disturbed. The wretched creature had tried to eat our favorite Syrian hamster!

We have a cat door that has been left wide open in the past so that KT can go wherever she likes. She doesn't like the flap on the door, so I removed it. It's just a framed hole in one of our doors. Yesterday I took the hard, plastic cover for the cat door and cut out a KT-sized hole in it and slipped it into place over the cat door, reducing it from a large opening to a smaller cat-sized opening. 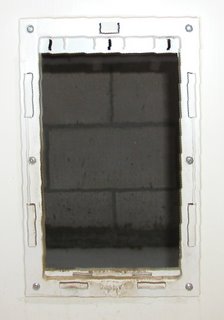 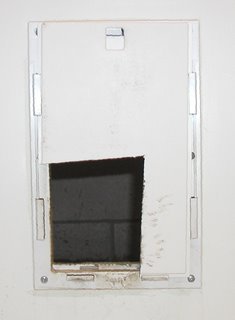 The door with the new raccoon shield. The opening is now 6"x5". Note the muddy claw marks on the sides of the opening.
This morning I got up at my usual ungodly hour and came downstairs to the sound of plastic being scratched and pushed around. The raccoon had somehow squeezed through the door and had climbed up on the food bin and was trying to open it. When I turned the lights on he must have run off because I never got a glimpse of him.

I'm scratching my head trying to figure out what to do next. I hate litterboxes and only use them when it's raining outside. If I seal off the cat door entirely, I'll have to put one somewhere in the house and keep KT inside at night. I don't think I'll go that route right yet. I think I'll first try a motion-sensitive light in the laundry room where the cat door is and move KT's food into the garage where the raccoon can't get it.

Whatever the solution ends up being, KT and I sat on the stairs today and agreed that the raccoon is a very, very wicked animal. 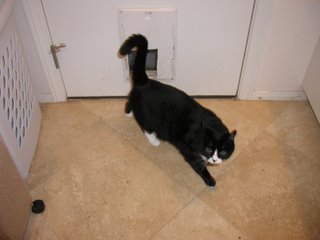 Other felines ferociously fend off fearsome fiends at this week's Carnival of the Cats.
Posted by K T Cat at 5:57 AM

You might try getting one of those doors that only opens if our Maximum Leader is wearing a special device on her collar. I'm not sure how expensive they are but it would probably be worth it to not have an unauthorized critter in the house.