Thomas Edsell Flops Around on the Dock

This is a very oblique approach to the subject, so bear with me.

I am a big fan of the Electric Light Orchestra (ELO) and I have been for decades. Way back when, they came out with the album Time. Their popularity was waning and despite Jeff Lynne's prodigious songwriting talents, they just weren't able to successfully navigate the change in music from disco to arena rock. They got one big hit off of the album, Hold on Tight to Your Dream, but everyone knew they were on their way out. At the time I heard an interview with their drummer, Bev Bevan, where he talked about the band being just where they wanted to be and appreciating the support of their fans. That was PR code for "well, at least we still have the hard-core ELO fans even if we aren't growing in popularity."

He had no one fooled, least of all the DJ interviewer and he was putting the best face on what was clearly the downside of their careers.

I thought of this as I listened to Thomas Edsell and his interview with the Feline Theocracy's Patriarch of the Airwaves, Hugh Hewitt. Mr. Edsell was honest and forthcoming and Hugh did an absolutely stellar job (as always) with the interview. I found Mr. Edsell's performance akin to a caught fish, flopping around on the dock before it is cleaned and eaten. "Yes, well, I'll make a few last attempts at escape, but really, I'm exhausted and this is just about it for me." 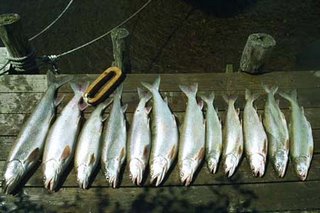 The editorial boards of the WaPo, the NYT and the LAT gather together for a photo shoot.
The interview is a great read. Here's my money quote.

TE: I agree that whatever you want to call it, mainstream media, presents itself as unbiased, when in fact, there are built into it, many biases, and they are overwhelmingly to the left.

HH: Have you ever said that…in the course…when you were working for the Post, would you tell people who you voted for, and how liberal you were?

HH: Yeah. You ever write a column about…you know, I’m a left wing Democrat, but you can trust me. I won’t mess around with the candidates?

TE: No, because I’ve screwed over as many or more Democrats as I have Republicans.

That's pathetic. The whole premise of this part of the conversation, accepted by Mr. Edsell, is that the mainstream press is getting killed because it is biased. To now go and claim that his body of work isn't biased is hopelessly silly. Of course he hasn't given them equal treatment. None of his comrades at the WaPo have done that. That's why Hugh Hewitt has a successful radio show. Hugh fills a need caused by the left-wing bias of Mr. Edsell and his comrades.

Re-reading the quote, one could also argue that Mr. Edsell was throwing his colleagues under the bus and trying to save himself. "The MSM as a group is biased, but I'm not." Whatever. It was a listless and flimsy defense of an intellectually exhausted movement. The MSM and the biased press is running out of gas as more and more people turn to alternative sources of news precisely because Mr. Edsell has not "screwed over as many or more Democrats as I have Republicans."