I Volunteer to be Marques Colston's Publicist 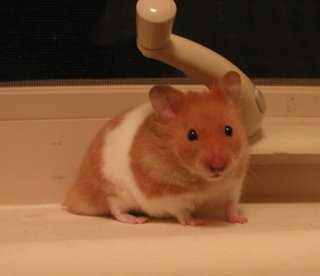 This week saw the Terrell Owens Carnival break new ground as his publicist called the police fearing he had tried to commit suicide by taking too many painkillers. That got me to thinking.

Whatever the job is, I am hereby naming myself, Jacob the Syrian Hamster, Marques Colston's Unofficial Publicist.

Marques Colston is the New Orleans Saints rookie wide receiver who was drafted in the 7th round from Hofstra. From everything I've read, he's an all-around nice guy and has played extraordinarily well.

My first job as his publicist will be to...

Jacob, what are you doing?

Why KT, I'm glad you could stop by. I always welcome a little help from our Maximum Leader.

Thanks. Now what is this I hear about you naming yourself Marques Colston's Unofficial Publicist?

And just when were you going to tell him?

I figured he'd find out the next time he Googled his name.

Jacob, you're a hamster.

You're nocturnal. You don't even see him play.

I saw the Monday night game.

Sigh. Whatever. Just don't call me if his people get upset with you.

I hope you know what you're doing.

You'll see. Anyway, where was I? Oh yes, Marques is doing a great job for the Saints. Let's just see how he stacks up to Mr. Terrell "I Can't Walk Across the Living Room Without Drawing Attention to Myself" Owens.

Marques Colston: 15 receptions for 204 yards, 2 touchdowns, 36 yards is his longest and his average yards per catch is 13.6

Terrell "I Keep My Pills in a Sock Drawer" Owens: 9 receptions for 99 yards, 1 touchdown, 21 yards is his longest and his average yards per catch is 11.

After three games, Marques Colston is outplaying one of the highest paid receivers in the game. I think more people should know about this. Maybe he needs a publicist after all. Marques, call me, baby. I work for sunflower seeds.
Posted by Jacob the Syrian Hamster at 1:57 PM