Welcome Pajamas Media, Austin Bay and Blue Crab Blvd. readers - more updates are at the bottom of this post.

As the Syrian (hamster) part of this blogging duo, I thought it my duty to blog about Israel's response to the attacks against it. On the right side of the blogosphere, there has been considerable discussion and analysis of the conflict facing Israel. One of the bloggers asked offhandedly what the lefty bloggers were saying. After scouring Kos and his linked sites, this was the best I could find.

I have believed from day one that the Iraq war was just step one in a scheme to engage in a regional war in the Middle East...We all know through various reliable reports that the neocons have thirsted for a regional war. Iraq was always intended to be phase 1. The neocons and Israel apparently believe that they will never be able to "solve" the Palestinian problem by diplomacy...their solution appears to be to invade all the countries they believe are causing this problem... Remember, they create reality. The reality they are creating in the Middle East certainly looks like a regional war meant to take out Iran and Syria.

Thirsting for war and creating reality? Just what are these neocons and what do they look like? Hmm. Let me do some research... 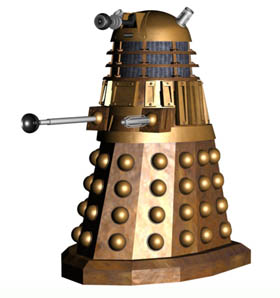 Artist's conception of a neocon.
Good Lord! No wonder everyone is so afraid of them!

Oh. Sorry. Well, anyway, there you have it. The entire lefty analysis of the conflict in Israel. Bush and the neocons are behind it all. Who knew?

Update - In all seriousness, this is pathetic. I just spent another hour looking through the blogs and found nothing but the standard raving about President Bush poisoning wells and devouring infants. Not a thing about the Hamas tunneling under the wall to kidnap a soldier and Hezbollah ambushing a patrol to kidnap two more.

The ridiculously unstable and already horrible situation in Iraq. Which was made far worse in the very recent past by the open news of some of the more criminally insane of our soldiers raping and murdering children.

Summary: Israel is overreacting and our soldiers are raping and pillaging. By the way, can these people order breakfast without attacking the country?

"I'll have the two eggs scrambled and the bacon crisp, please. And please tell the cook that we're oppressing the people of Iraq."

At the time, critics called the whole neocon idea of remaking the Middle East as a peaceful, Democratic, pro-Western region via the transformation of Iraq misguided, naive, and flat-out wrong...it looks like the invasion of Iraq not only hasn't worked, but has backfired vis-a-vis the regional power balance...The bottom lie (sic) here is that the war in Iraq, which was sold to us by the Bush Administration as supposdly a way to bring peace and stability to the Middle East, has now led to the exact opposite. Today, we face possible war between the United States and Iran, Israel and Syria, Israel and Lebanon.

Hugh Hewitt is trying to sewer dive the lefties himself without much luck. Really now, Hugh, you should know better than this. Leave this to the professional loonies like us. Surfing the left isn't a job for a logical, educated person. It's a job for a Syrian hamster. Or are you a closet rodentophobe?

If all that hate has got you down, check out this post describing how the US Navy was there to help after the Asian tsunami.
Posted by Jacob the Syrian Hamster at 9:13 PM

Thank you for mentioning this. It is disheartening to keep asking the left what they will do/would have done, and get nothing but blather.
Well, we wouldn't have done what Bush has done. We would have uh, negotiated. And worked on the root causes of terror - which are also the root causes of environmental ddestruction, lack of universal health care, and AIDS...

G'day, I'm Morris, and over at my blog 'The Greatest Blog Experiment' I'm creating something of a blog directory. I would like to invite you to join me. Its a simple process of link exchange, which will help generate traffic for your blog. Please come and visit my blog if your interested: http://thegreatestblogexperiment.blogspot.com/

What a typical neocon comment. You're part of the NSA surveillance team, aren't you? I'll bet your goal is to watch where I hide my sunflower seeds and then reveal it to Karl Rove so Condoleeze Rice can steal them. Well, it won't work!

Sorry about that Morris. Jacob's been up all night reading those lefty blogs and it's gotten to him.

Love the Dalek!
I'm one of those bleeding heart liberal types and I gotta say I support Israel on this. Kidnap our peeps and we'll come at you.

Why do they hate America?

George Bush has proven himself to be the right man at the right time. With the help of the V.P., he has steered the world toward sustainable peace in the Middle East. It is just around the corner.

The rest of the world appreciates us. Why can't the Lefty Blogosphere?