On September 11, 2006, 2,996 volunteer bloggers join together for a tribute to the victims of 9/11. Each person will pay tribute to a single victim. In this post, I honor Margaret Elaine Mattic. 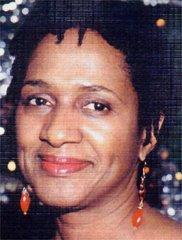 Margaret was 51 at the time of the attack. She was working as a customer service representative for General Telecom in the World Trade Center's North Tower on the 83rd floor. After the building was struck, Margaret made one final call to friend in New York. She told her she was trapped in the building and couldn't get out. She asked her friend to call her mother.

Margaret was an artistic soul and was deeply involved in the theater. She was a 1967 graduate of Cass Technical High School in Detroit and an acting major at Wayne State University. In 1998, she starred in the 12-Gauge Review production, in New York, of a play called "Oversight."

Margaret loved performing, which was surprising since she seemed so quiet. She studied theater at Wayne State University. After college, more productions followed, including appearances as a guest artist at Dillard University (New Orleans), where she portrayed Alberta in "Sty of the Blind Pig," the 1971 work by Phillip Hayes Dean about a black family in Chicago.

Margaret wound up in Manhattan to pursue acting. She usually took temporary jobs, typically as a receptionist, so she could go to auditions. In New York, she performed with the Rainbow Repertory Arts Ensemble and was the Conjur Woman in The Kompanie! Inc. production of "Dark of the Moon."

Margaret was also a playwright. Several years ago, she said her goal was to have her play, "Mother of Pearl," produced in New York. Recently, she talked to friends about producing and starring in a one-woman play she had written, called "The Vision," about how the gift of prophecy changed several generations of a family.

At 51, she also wanted the comfort of a permanent job, so she became a customer service representative for General Telecom in the World Trade Center. "Every employer she ever worked for always loved her voice," recalled her sister, Jean Neal, 56. "It was so soothing and gentle and soft."

I never met Margaret. I wish I had. In reading tributes to her across the Internet, you can tell she touched many people's lives with a kind and gentle hand. Today my prayers and thoughts are with Margaret.

Many other blogs are paying tribute to the victims of 9/11 and some are listed below. StoptheACLU has a tribute as well.

If you are participating in Project 2996, please add your link. Comments are welcome from all.

Lovely, lovely tribute. It makes me wish I'd known Margaret too.
Many Blessings!
Robyn

Thanks to both of you for the kind words and the link.

That was a beautiful tribute, KT. It was such an honor to participate in this project, wasn't it?

I have a tribute up as well.

Poignant and thought-provoking tribute to a lovely lady. We've all been brought together in this project by the inhuman acts that happened on 9/11/2001. It's reassuring that wonderful and "human" folks like yourself gave of their time to make this project a success.

Thanks for introducing us to Margaret. Seems like she was a very talented and warm person.

Thanks for having visited to meet Ginger as well.

Margaret was a beautiful woman. Thanks for sharing.

Thank you for your tribute to an amazing lady. What an artistic soul that we lost that day.

We will never forget.