My retirement savings took another beating last month. My full retirement date is now about two more years off, possibly even more if the market keeps getting whacked.

Gas prices are falling, but only because we're draining our strategic petroleum reserve at an insane rate. 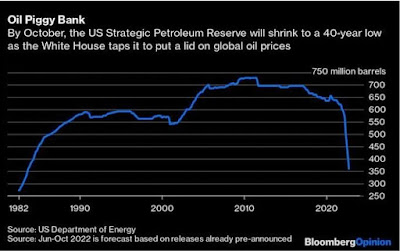 Our border is totally out of control.

The result of a successful human smuggling operation in Yuma. Smugglers bring in groups of migrants from countries all over the world like Russia,Georgia , Belarus , Cuba , Brazil and more
Massive line of migrants await to be apprehended by border patrol agents @DailyCaller pic.twitter.com/0aGEDZSjek 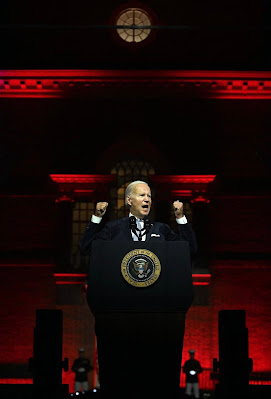 He raged against "MAGA Republicans," whatever they are. As he tells it, MAGA Republicans are poisoning wells and eating babies. Or something like that.

What is going on here? Some people have said that it's the prelude to legal action or seizures or violence or chaos, but I don't see that. I see a leadership class that is completely adrift from reality. What in the world was he saying? MAGA Republicans are a threat to democracy? Would it be too much to ask our government not to wreck things? Maybe they can concentrate on that instead of their attempts to reenact the 30 Years' War with red vs. blue instead of Catholic vs. Protestant.

I watched some of the speech, a section picked at random from the middle, with the sound muted. It looked exactly like my dad did when he would get agitated and angry near the end of his life. It's one thing for Biden to be suffering from end-of-life, dementia fury, it's quite another to see ostensibly rational and educated team in his administration lean into it with an aesthetic that looks like it was pulled from Dante's Inferno.

Seriously, try this one with no sound and see what you think. I got nothing after that.

Where do pro-life democrats fit on the spectrum?

==Where do pro-life democrats fit on the spectrum?==

The same place as unicorns, Santa Claus and the Tooth Fairy.