In August, I celebrated my 60th birthday. I had been lifting weights for the previous year and was quite serious about it. I tried to work out 6 days a week, but typically, it was 5. I had set goals for myself to hit by my birthday.

I hit the first three, but not the abs. There's an old saying that I learned last year - abs are made in the kitchen. There's another - you can't outwork a bad diet. I worked my abs hard, but they remained concealed by congeal.

At the Instapundit's suggestion, I recently bought Bigger, Leaner, Stronger. In it, I discovered that my diet had indeed been poor and not just because of the brewskis. If you're lifting, the author recommends a 2-2-1 diet. That's the ratio of grams of carbs to grams of protein to grams of fat. Mine had been more like 4-2-1. I was getting way too many carbs and only about half the protein I needed.

I've adjusted my diet since reading that, but I'm not counting my macros - those grams by type, listed above. I'm just doing better. I've been tracking my beer intake now for months and over the last couple of weeks, I've cut it back in a way that's sustainable.

By the way, beer has carbs, but bourbon doesn't. No, I'm not hitting the sauce, but facts are facts.

In any case, being a sciencey type, I decided that things need to be measured. I looked up local body fat assessment places and finally made an appointment with an establishment that does full-body scans. Those are supposed to be the most accurate.

I bought a 4-pack of testings and went for my first one today, figuring I'll go every 3 months to see if I'm making progress. Today's results were disappointing. 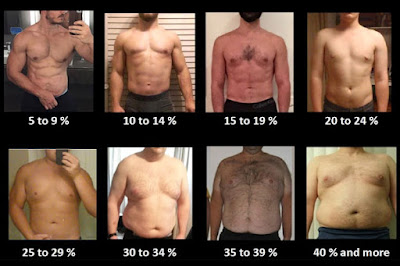 I'm stronger now than I've ever been in my life but there's the blobby gut just sitting there, mocking me. My new goal is 20% body fat.

At first, I'm just going to see what happens when I'm aware of my macros. I'm not going to count calories, but I will continue to track the brews and see if I can keep them under control.

The other thing the book taught me is that my sets have been wrong all this time. In order to make weightlifting gains, you need to push your muscles for more sets than I'd been doing. My previous routine was 15-12-10-5 reps with the weight increasing commensurate with the decrease in reps. Only the last set really pushed my limits. I should have been doing double that. These days, I'm doing 15-10-7-5. The last two sets are stressors. The first set is a lightweight warmup to get my joints used to the motion.

In any case, wife kitteh has been able to tell the difference and I feel a whole lot better after a year of working out seriously. My cardio has improved, too. I'm now doing 25 minutes of incline fast walking on the treadmill at the end of every workout. I've seen my heart rate drop over time, which shows me at least that part is doing it's job.

Now if I can just get rid of this gut...