Rush Limbaugh is Wrong, Tax Cuts do not pay for Themselves

The current election cycle has caused me to rethink much of my political beliefs. As I've watched a couple of Republican candidates, Mike Huckabee and John McCain, be savaged for deviating from conservative orthodoxy, particularly by talk radio, I've begun to question much of what I've heard over the years. Frugality and living within your means have been frequent themes on this blog. The budget deficit in Washington drives me crazy. The thought that we're spending our children's money to buy goodies for ourselves is fundamentally immoral.

Opposition to tax cuts is one of the prime examples of conservative apostasy used by demagogues on the right to illustrate how this candidate or that is a Republican In Name Only (RINO). Rush Limbaugh in particular has frequently claimed that "tax cuts pay for themselves" in terms of economic growth. I've never cared enough before to look this up. I finally did.

The Center on Budget and Policy Priorities has very convincing data that show that Rush is completely wrong.

(E)conomists from across the political spectrum — including economists who have held top positions in the current Administration — reject the argument that tax cuts pay for themselves. In tax policy, as in other aspects of policymaking, there is no “free lunch.”

Here's a cute headline within that article for all you RINO hunters out there: "Treasury Department Study Finds the Bush Tax Cuts Will Pay For Less Than 10 Percent of Their Cost."

I'm not going to bore you with further quotes from the article, but suffice it to say that it convinced me of something I had felt for quite some time.

So what does it mean? Well, it means that if you're running a deficit, cutting taxes is essentially taking out a bigger loan to hand everybody cash. Kind of like going to one of these places. 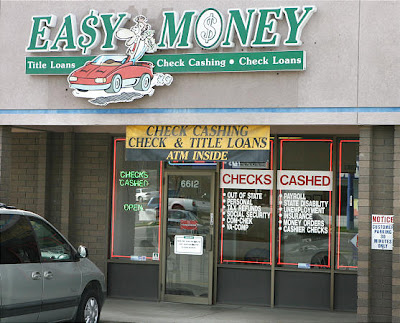 Since I don't frequent these establishments, I must be a RINO.
Update: Here's a nice, succinct quote from that article for all you RINO hunters. "(I)n the long run, the deficits that result from unpaid-for tax cuts constitute a drag on the economy because they lower national savings." In part, that's because you're not just having to make up the cost of the tax cut, you're also having to make up the interest you pay on the loan.

Update 2: Lest you think I'm leaning towards the Democrats, read this and then take a look at either Hillary's or Obama's health care proposals. The only group that makes the Republicans look fiscally responsible are the Democrats.
Posted by K T Cat at 5:23 AM

I don't know. This current administration has put even the Mules to shame when it comes to looting the treasury. With a three way rule for four years, the prez approved every pork project congress sent his way - remember the Alaskan bridge to no-where? It wasn't the exception, it was the rule.

What have we seen from Nancy Pelosi and Harry Reid? Fiscal responsiblity? An end to ethanol subsidies and all manner of other throw money out the window kinds of projects?

The race is close on who spends the most right now, but Obama and Hillary are the great tie breakers. They promise the world and never talk about paying for it. They're both nuts.

Of course, the Republicans have Mitt Romney promising more subsidies for ethanol, Federal backing of hurrican insurance and then gobs of cash for Michigan's auto industry. He's emptying your wallet to buy himself votes.

I gave up on Rush years ago when I realized how much his favorite topic of conversation had shifted from the idiocy and corruption of the Democrats to: himself.

niall, I haven't listened to Rush in quite a while for the same reason.

Is it surprising that any economic gain from a tax cut would be insufficient to actually replace the entire amount? No, it isn't. OK, so a tax cut costs the government money. Is that bad?

Is the goal of government to absolutely maximize their total tax income? No. Well at least it shouldn't be. It should be to collect sufficient taxes to "insure domestic tranquility, provide for the common defense, promote the general welfare, and secure the blessings of liberty to ourselves and our posterity" and that's all. After that, the government should stop spending (and stop taxing) and let the people spend their own money.

ohioan, I'm with you in principal. I'm not for more government spending. But if we want those goodies, we ought to pay for them ourselves and not leave it to our kids to pick up the tab.

What would it be like if the government only took as much of the GDP as it did, say, 25 years ago?

KT - I think we agree. I don't think that every goodie that anyone thinks of, or promises in order to buy votes, should be something we pay for. Cut the blasted budget. Balance it. NOW. I don't want my kids having to pay for these excesses.

I actually downloaded the report so I could read it in the EZ chair. I'm going to keep an open mind but I'm immediately skeptical of any outfit of which Paul Krugman says nice things.

I agree with Ohioan... the contention that tax cuts don't generate the make-up tax revenues doesn't really bother me.

At the end of the day, I'm being asked to be skeptical of, not "goodies", but my money because of the fiscal irresponsibility of the government. I find that a hard pill to swallow, indeed.

Again, an open mind. Thanks for presenting this and making me think for once.

The thing is - it's not just that tax cuts do allow more money to flow into the economy - it's that the government has no right to take more than the 30% they already take (and remember it used to be WAY higher), it's that they HAVE to cut spending. The tax rate could be 70% again and they would want 80%.

The idea that tax relief boosts the economy is an argument in favor of tax relief which is desperately needed - but it really ought to be about controlling spending.

And then there's the billionaires like John Kerry and John Edwards who pay no INCOME TAX, because their money isn't qualified as INCOME - who like to say "the rich should pay more."

As always, a complicated and multi-faceted problem, but I disagree with that guy's conclusions.

There are just so many factors that eat up the freed-up money, with increased costs of doing businesses, draconian new fees on developing, and building... a tax cut may just help someone stay at even in recent years.

Thanks for the comments!

Dean, this was the first of a long, long list of articles saying the same thing. I was finally persuaded to look into this after reading through a very length WSJ comment thread where readers were asked how they would spend their stimulus tax cuts. The scorn heaped on the idea was immense. You could try to argue that WSJ readers are liberals or uneducated in finance, but that's a pretty tough sell.

Rose, I agree that the appetite for spending is endless. However, I think Reagan was wrong in one thing. Cutting their source of income hasn't cut their spending. The deficits under Reagan and both Bushes have gone crazy. I think that Newt Gingrich is the only thing that prevented them from going totally crazy under Clinton as well.

I'm arguing for fiscal responsibility on both sides. No more pay day loans and no more free ponies.

Rose, one more thing. I am completely in favor of a flat tax with no or practically no deductions. One of the problems with our current tax structure is that too many people pay little or no taxes, including the people at the lower end of the income scale. For these people, Hillary and Obama are essentially promising something for nothing and being truthful about it.

Why not vote for universal medical insurance if someone else will pay for it?