Barack Obama and Mike Huckabee - Lots of Poop, but no Pony

So I stopped by the websites for both Barack Obama and Mike Huckabee this morning to check out their stands on the issues. They're almost identical. Of course, all of the politicians are saying almost the same thing. I think you could make a generic candidate out of an amalgam of almost all of them (Fred and Ron Paul aside) and come up with the Republocrat Android V 1.0.

Here's how it would stand on the issues along with the painful reality.

Health Care - Everyone should have health insurance. Health care costs too much. If it was more effecient, it wouldn't cost so much. We can all have all we want with my plan.

Reality - It costs alot because no one wants to die. We all want state-of-the-art health care. Improvements in health care are becoming more and more expensive. Peter Drucker clearly proved that improved quality in health care leads to vastly increased costs. 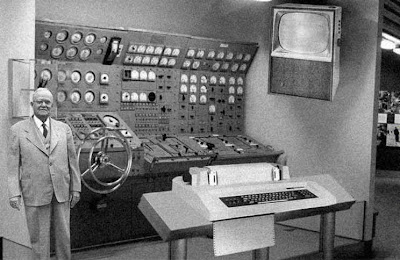 Republocrat Android Version 1.0, seen here with his press secretary, will make you smarter and wealthier while improving the environment, all at no cost to you!
Education - Kids can't read or write too good. Teachers need more money and we need to start teaching the kids sooner. Maybe when they're still in the womb. I will increase funding for pre-K classes and lower college tuition. I will pay the good teachers and institute in-class spankings for the bad ones.

Reality - Kids from stable, two-parent homes do just fine. Kids from single-parent homes don't do so well and in particular, ones from neighborhoods where the social fabric has been shredded are just totally screwed.

Energy - We need more funding for research. I have a plan to make us energy independent. We shouldn't import oil.

Reality - We've been playing this game for years and getting nowhere. We use oil because it costs less. We have to import it because we don't have enough of our own. Get over it. We're not tungsten independent, either. How about a plan for tungsten independence?

Reality - We're beyond broke. We spend every penny we get in taxes, we spend all of our retirement savings and we're running up our credit cards as fast as we can. Each one of us, every man, woman and child, owes $30,000 on the national debt. A family of four owes $120,000. Pay up.

I didn't think I'd find this when I started looking at the candidates. I came away from this little exercise more cynical than before. I just thought I'd share.

PS - Of course, you could always just support Fred.
Posted by K T Cat at 5:48 AM

KT, I'm reckoning from the recent level of activity here at the 'Post, you must've kicked whatever ailed ya...and how!

Other than drippy one-off anecdotes I get from people that favor universal health-care, the only other argument I hear from every single one of them is "well... everyone else has it..." That's it. That's the best (only) arrow in the quiver. Amazing.

"If you think Health Care is expensive now, wait 'til its free" - P.J. O'Rourke

KT,
Hey, I recognize that picture. I didn't know it was in the public domain. And I want you to know that, as a former submariner, I am not amused with the android comparison. Just kidding, seriously, where did you get the picture?