It's with deep regret that we announce that our little blogging buddy passed away yesterday of old age. He was 2 1/2. He went quietly in his sleep after dining on a wide assortment of seed treats and bits of fruit. 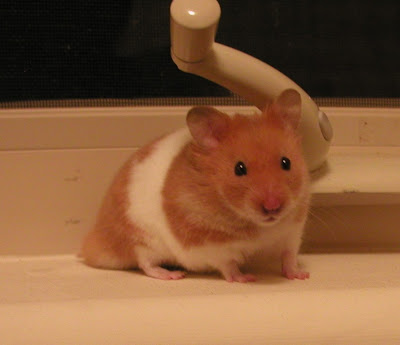 Jacob was so active that I finally had to stick him on a windowsill to get a decent shot of him.
My little man taught me a lot about how to enjoy life. When I would take him out of his cage and sit with him, everything in the world delighted him. He climbed in and out of filing boxes, scaled small trashcans and plopped down inside of them, leaped into book shelves and when given the chance, would try to escape into the rest of the house to explore it. His energy was almost endless.

One day I tried changing his food from the standard rodent pellets to an assortment of seeds. I had taken him out to run and sat with him while he tried his new food. He nosed about through the food and then stepped back for a moment. You could just see the light bulb going off in that fuzzy little head. He practically levitated back into the food dish and tore through it, finding his favorite bits and stuffing them into his cheeks as fast as he could.

It's going to take a little while to get used to the house without Jacob in the study. Every evening I would go in to see if he was up, calling out, "Rrrodent! Where is the rrrodent?" trilling the r's. I spent a lot of time trying to get good photos of him to share with you, with little success. I'll still blog in his name here at the 'Post, but I'll have to give up on my plans for a hamster music video and other such odds and ends.

Someone told me that people come into your life for a reason. I'm not sure that's a universally applicable statement, but I know it can apply to pets because Jacob had a purpose in my life. He was there to show me how to take joy in the simplest of things. 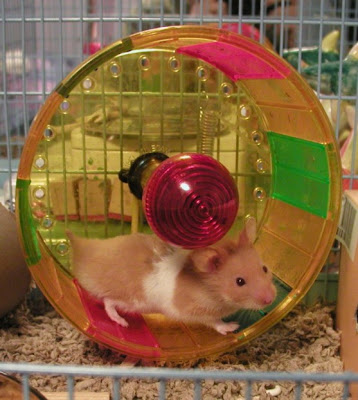 So sorry for your loss. Pets can really become members of our families. I know our three kitties have.

I'll take that as "God bless" with a couple of typos and say "Thanks."

Oh, Jacob! We will miss your cheerful attitude and your devoted service to our Maximum Leader... RIP, little friend.

I imagine there's alot to explore in hamster heaven.

Wow...I'm getting choked up about the peaceful death of a bloody rodent I didn't even know....

That's a heck of a back-handed complement, but it's true and heart-felt.

Thank you for letting us "meet" him.

I'm really sorry for your loss, KT. Animals can indeed love and be loved as much as people, if not more. I think it's entirely appropriate that his last post was about "giving to the less fortunate" squirrels. He certainly gave a lot to us.

Sorry to hear of Jacob's death, I know he has been a valued contributor since the beginning of the Scratching post.

I'm sure that Jacob is running happily about heaven.

The Lord giveth, the Lord taketh away...

I've enjoyed reading about Jacob's antics. While I probably don't care for him as deeply as your family, my heart is saddened at the loss of so fine a companion.

May our Faithful Beedle rest peacefuly for all Eternity.

All Hail our Beedle! Long live the Feline Theocracy!

We're sorry that your little friend has gone - it looks like he had a ball whatever he did,

I am very sorry for your loss. Reading your posts about Jacob was always a delight.