- Dividing a market into distinct groups of buyers who have distinct needs, characteristics, or behavior and who might require separate products or marketing mixes.

Nissan sells three makes of sedan. The Sentra for the budget-conscious buyers, the Maxima for the luxury buyer and the Altima for those in between. They all do the same thing. They take you, some passengers and some stuff from point A to point B. Each seats 5. There is some difference in luggage space. There is distinct difference in the who they are marketed to, how they are sold and how they are priced. 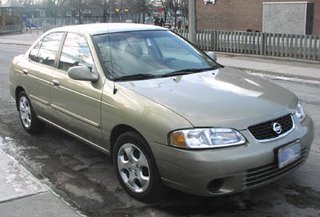 A Sentra, built for those with small budgets.
If you own a business, from time to time you re-examine your product line to see if you have any gaps. When I look at the way the news from the war against Islamofascism is presented, not including the enthusiastic count of dead Americans from the MSM, I see two market segments being served.

The first are the professional military officers. If you watch the videos on any of the DoD websites, you see a polished product with high production values. If I worked for that company, I wouldn't want to see anything else. Grainy video, mumbled voice overs and poorly framed shots would be an embarassment to the organization.

The second are the action videos taken by people at the front. These are red meat for the war supporters who are sick and tired of only one score being given by the MSM. Every night, the ghouls on CNN recount just which Americans died in as much detail as they can. If possible, they show film of the surviving family members and talk about how many Americans have been killed so far. No mention is made of the number of enemy dead and no map is given of the peaceful provinces that have been handed over to Iraqi control.

By the way, this is an old technique. Lord Haw Haw did this in WW II on his radio show broadcast to the Allies. He would interview Allied POWs, give lists of dead Americans and report the nightly count of Allied bombers shot down. Of course, he worked for the fascists, but then again, a good argument could be made that Wolf Blitzer does the same. This site has a collection of archived broadcasts from Lord Haw Haw. It's chilling to listen to them and then watch CNN. I digress.

That's it. Those are the only two markets being served with any regularity right now. The professional military and exasperated war supporters. Is it any wonder that the Islamofascists aren't taken seriously by many? There's a large segment of the population that doesn't know anyone in the military and can't relate to these two approaches. Multicultural sensitivity is central to the American value system. Our children are taught that each culture has something good to add to the mix and that our ancestors weren't perfect, they were flawed just like everyone else. For those who are indecisive because they think both sides are equally destructive, there is no marketing campaign at all.

That's a huge market share to just leave lying on the table. That's why I'm working hard to find candid videos of the Coalition doing constructive things and why I'm encouraging others to post them. Like this one.

Okay I picked you as my Numero Uno Blog that makes you think. There is a whole meme going round right now, but I've been too lazy to even get the HTML code for it.Wish I had the chance to stop by and read more often.