Paths of Glory is a 1957 movie about a French unit in World War I that attempts to capture an entrenched German position. Kirk Douglas is in command of the unit that General Mireau, the incompetent who orders the attack, and General Broulard, the cynic who doesn't care about anything but power struggles within French Army, insist take a heavily fortified position called The Anthill. The attack is a disastrous failure and repulsed with massive French losses.

The scene below takes place the morning after the attack. The generals eat croissants with jam and sip coffee from fine china inside a luxurious chateau, discussing the battle. The first half of the scene is relevant to this post for reasons to be explained shortly.

Six black men have been arrested in connection with 70 attacks on Asian women in the SanFran area. 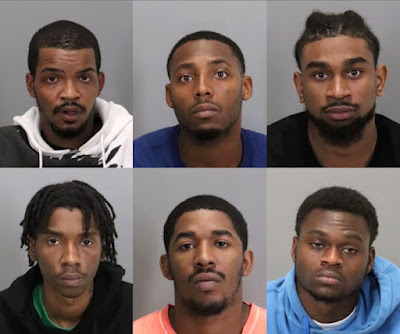 The more of this kind of thing I see, the more it looks like the combat scenes from Paths of Glory. In the movie, the French infantry do what their leaders tell them to do and the results are catastrophic for them, but cost their leaders nothing.

What did those 6 men pictured above do but follow the instructions given to them from our leaders? We endlessly preached race, race, race and they focused on race. We told them they were doomed to failure because of racism and they chose to take revenge on another race.

They will go to jail. Robin DiAngelo will continue to give racialist speeches for 5 figures a pop.

Education leaders in Oregon and California have taken steps to remove performance requirements from their schools. New York and Baltimore regularly promote students who clearly aren't performing at grade level.

Kids end up graduating from high school as functional illiterates. With each sunset, the teachers and administrators are one day closer to excellent government pensions.

Jacob Blake's girlfriend was, according to our cultural leaders, a strong, black woman. After all, Cardi B and Megan Thee Stallion both promote whoring and we are told they are examples of success.

Jacob Blake's girlfriend was regularly brutalized by her baby daddy. Cardi B lives in a mansion.

Throughout it all, the Elites sit in their faculty lounges or wear expensive suits in TV studios or write pieces for the Atlantic and New Yorker, eating croissants with jam and drinking coffee from fine china. They preach a world view that cannot result in anything but failure for the Normals, their infantry.

On the right, we love to focus on the law-and-order aspects of things. More cops! More arrests! More discipline in schools! That's like arranging for more ambulances to be at the battlefields. If our generals are ordering one doomed infantry assault after another, we might want to look into that instead.

As If On Cue

Taught racial hate, Terryous Baker went over the top, only to get tangled in the barbed wire before being shot down. He was able to injure one enemy soldier in the process.

A Christmas parade in Winter Garden, Fla. was forced to cancel after a car driven by Terryous Baker allegedly accelerated toward the crowd & eventually crashed into another occupied vehicle, injuring that driver. The suspect then tried to escape. https://t.co/MuecRuvN4W pic.twitter.com/nktpivhj9L

No Friday's Garage Logic, a listener wrote in about an incident that took place in Maplewood, at the Cub grocery store. About 6-7 miles from my house. It's not a dangerous part of town. Or it least it didn't used to be. Anyway, a man was at the traffic light waiting for it to turn; he'd taken his mother-in-law to the store to get groceries. In his mirrors, he notices 2 Maplewood Police trying to box in the truck behind him.

The light turns, and before he can even react, the truck rams him from behind, pushing it out into the street, and races off. He checks on his mother-in-law, and gets out of the car, and goes to talk to the cops. They call an ambulance to check out the mother-in-law. As they wait, he talks to the cops. Stolen truck, but they didn't pursue, and he asks why. The cops replied, 'we are not allowed to pursue'.

This is the area, were miscreant kids at the high school, made a game of stealing cars and then getting in to a car chase with cops trying to get away. Inevitably, a kid crashed, and passengers died. Parents blamed the cops. Never mind the fact, that the crash happened, more than a mile past where the cops stopped the pursuit.


I have a campaign slogan for the Progressive Democrats for next year.

"Protecting criminals from the law-abiding". I'm wondering about the "since when?" part of the slogan. When did this race war start?

I know you have said, and rightly so, that we can't jail people our way out of the mess the left has got us in. But, some has to happen.

On a happier note, my wife and I have put down and offer on a house out of the twin cities, though still close enough to come in if we needed anything. I can't imagine what that would be. We close at the end of January. She is going to finish the school year (no pension for her, this is a private school), and we'll put this house up for sale in May/June.

Amen, brother. It's got to start with policing and law enforcement, but we have to admit that such things are just to stop the bleeding.

What I was trying to suggest with this post was a different way of looking at the perps. To me, when I think about what is happening, I can't tell the difference between what, say, the San Diego School District is telling the perps and what they're doing. You'll never pass the tests and the "system" hates you. If you truly believed that, you wouldn't study and you'd turn to crime, not just to get stuff, but to exact a righteous revenge.

The French infantry part comes in when the people not studying and committing crimes experience the consequences of those actions. I liked the analogy of feeding men into machine guns to telling Kids of Color that destructive behaviors are good.

Oh, I agree. The low level criminals are the soldiers marching to the orders of the Progressive elites.

Daunte Wright, the kid who was killed by the cop in Brooklyn Park (Minneapolis suburb - and the cop is on trial right now) is dead because of the elites preaching hate and defund the police; first and foremost. He believed that he could resist arrest, rest himself free, and get into his vehicle and drive away because the elites told him "the police are the problem, and he is morally allowed to be a scumbag beating women and robbing people". Those aren't exact words, but close.

Meanwhile, non-elected beaurocrats here in Minnesota, are recommending reducing the penalties on criminals on parole for new crimes the commit while on parole.

At least the San Francisco mayor is now publicly saying she has a problem. Even if she doesn't believe it in her heart, at least she is talking the right stuff.