The DoJ is blaming black-on-black violence on White Supremacist ideology. Seriously. Here are the details, complete with a PDF of the presentation. I'll excerpt a couple of slides below. 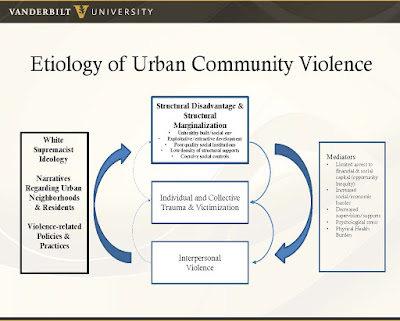 This is part of an "evidence-based" approach. That's what I find so exhausting. It's no different than the screams about Global Warming Climate Change when the CO2 is being generated by China. It's the same as the lockdowns where some places are still trying to keep people from gathering outdoors and forcing them to wear those useless masks. It's like listening to "authoritative sources" tell us that inflation is transitory while the Fed is still printing money to buy government debt. It's like seeing news stories about some $3.5T spending bill making its way through the legislature and hearing that it's all about "compassion" and "moving forward."

It's all so transparently stupid.

Then we get Psaki talking about how the government is trying to team with Facebook to stop disinformation about vaccines. Those would be the vaccines that are of no value to the under-40 crowd because they're not even vaguely at risk.

Or how about the Chairman of the Joint Chiefs of Staff telling Congress that he wants to understand Jewish Rage against Germans or whatever racist bile he was spewing.

This stuff is "evidence-based" only in that the evidence has been cherry-picked ahead of time to lead you to a single conclusion. I can't remember the last time I saw a legitimate debate where one of these characters was forced to answer obvious questions. Within my own organization, there's no Q&A after any of our woke indoctrination sessions. They all know it would lead to questions they couldn't answer, so it's transmit-only.

Here are a few more slides with commentary. Enjoy.

The presentation is a giant Rube Goldberg machine that tries to replace the traditional family with an elaborate contraption of activists, social workers and government programs. It's doomed to failure from the start because it can't scale to the levels required to care for all of the kids from, err, alternative households.

OK, I'm done. One more and then I quit. You can go to the link above, download the PDF and see more.

Wait while I grab some data...

In San Diego County (easy for me to grab this data so I will presume, without certainty, that it is representative of the country), there have been 51 deaths from CoViD-19 in the under 40 age group. There have been 163,254 confirmed cases. My best estimate for the population in the under 40 age group is San Diego County's total population (3.3 million) divided by roughly 2 (average age at death of ~80 implies about half below 40). Note the CDC rate data in that plot is per 100,000 people.

So the death rate for the under 40 crowd if you have a confirmed case is about 31 and in the under 40 population as a whole about 3.1 This is smaller than the lowest curve in the plot (it's about 80% the rate), but is so gigantic that our County and State (and to a lesser extent the entire country) was shut down for about 1.25 years. [Aside: Obviously the bigger concern is for the older groups who have much higher death rates... There are 3735 deaths in the over 40 group so that rate is ~230 and since essentially 1/2 of the deaths are in the over 80 group that rate is much bigger.]

If they really care about the CoViD death rates so much as to be willing to curtail our Constitutional Freedoms and cripple the economy, why do they shrug off the 21 (= 17 / 0.80) times bigger homicide rate for black males in roughly the same age demographic? Could it be because most of those deaths happen in the inner cities of cities that have been decimated by years of uninterrupted control by the same party that is in charge right now? Could the fact that the woke-sters are also of that party and are trying hard to find a story that would clear them of their obvious responsibility? Where does that show up in the Etiology (really 'Strawman') of woke Vanderbilt U? Nowhere. It is not "Narratives Regarding Urban Neighborhoods & Residents" (narratives are stories about things, which are posteriors, not priors). It is nowhere because that's just not a story they want to tell.

"How can it be racism and discrimination if you're the only race present?"

Well, the obvious response is, why is there only one race present in these areas where there are no jobs, no prospects, and high crime? Doesn't it take some sort of racism or discrimination to make them stay there instead of going elsewhere? Especially when members of other races either don't feel the need to live there in the first place, or find it easy enough to leave?

Q&A means you can’t leave and we’re not stupid enough to want to stay longer….

Ohioan@Heart said...
Could it be because most of those deaths happen in the inner cities of cities that have been decimated by years of uninterrupted control by the same party that is in charge right now?

You have reversed cause and effect. First the white flight and decimation happened, then the Democrats started winning all the elections.