Fresh Fish And A Jello Of Vegans

After getting shut out on a recent fishing trip, I was jonesing for some really, really fresh fish. Down near Seaport Village here in San Diego, there's a pier where fishing boats will sell their catch at please-take-it-off-our-hands prices. This morning, I got this beautiful, 23# bluefin tuna for $5 a pound. 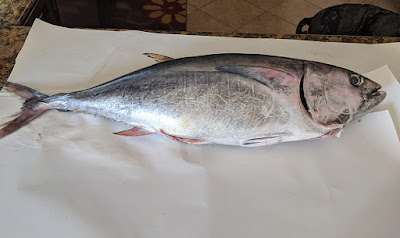 There was a booth that would fillet your fish for 50¢ a pound, but I really wanted to do it myself. Once I had told the fishermen that I had filleted smaller fish, they told me this was way easier. Which it was. It has no more bones than the little guys and they are much larger and easier to work around.

YouTube showed the way and after two videos, I was willing to take a stab at it.

The key was knowing that the purpose of your first slice was to get through the tough skin. Once that cut had been made, second and third slices along the spine quickly separated the flesh from the bones. The loins, as I found that they are called, pulled away easily.

I would guess that I got 18# of meat from a 23# fish. It will give me a couple of chances to cook it. Tonight, I think I will sear it in cast iron.

At the base of the pier where I bought the fish was a Jello* of Vegans, yelling at us on their bullhorns and chanting. One of their chants went as follows:

We have just begun to fight!

As I walked past, I joined in with my own version.

Out on maneuvers with the Guards later in the day, I came up with this one.

I was feeling hungry now!

Feel free to leave your own fish stories and/or vegan chants in the comments. Also, if you've got a better name for a group of vegans, I'm all ears.

* - I've decided that a group of Vegans is called a Jello. It's mushy, spineless and has no nutritional value.

** - Coon't is couldn't without the d pronounced.

I have three proposed names for a group of (possibly chanting) vegans.

First a ‘nugatory’. The word means ‘of no value or importance’.

Second a ‘cacophony’. That means ‘a discordant and meaningless mixture of sounds’.

My third and favorite is a ‘fluffle’. That’s the name for a group of rabbits. Then when they chant they become a ker-fluffle, which is a humorous-sounding word for some kind of disturbance, scandal or mess.

"A cacaphony of vegans" made me laugh out loud! It's perfect because they're never quiet. Whenever you have some over for dinner or go out with them, they have to tell everyone they're vegans, if for no other reason than to make sure they're following their dietary strictures.