This is Oli London. 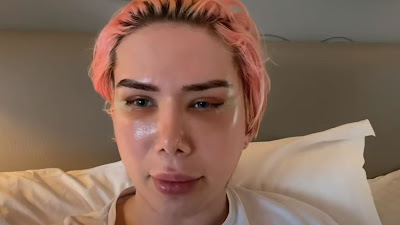 He's a social media phenomenon. He is British, but became obsessed with a Korean pop star to the point where he had 15 plastic surgeries to get his face to look like his idol's. Here's his testimony.

His life is ruined now.

Look at that face. So much damage has been done to it! What will it look like in ten years? How about 20? Someone, some doctor, their assistants and coworkers, did this to him. Yes, he requested it and paid for it, but he didn't do this to himself. Someone butchered his face.

The younger set love to talk about kindness and tolerance and all the gooey feelings that motivate them to "change the world," but I don't see much evidence of it. Taking a mentally-ill man's money and cutting his face apart isn't kindness or tolerance, it's sadism. At best, it's indifference. "Well, it was his choice. I only did it because he asked."

His future suffering means nothing to them. A post-Christian America is not a kind America.

You Can't Live Next To The Comanches

This short video from VDH is worth every second. He summarizes some of the things I've been ranting about here at the 'Post.

He wanted to be famous. The plastic surgeons wanted to be paid. That single video you posted says it has 3.8 million views. It looks to me like everyone got what they wanted. Sure, you don't like it. But then, you are hardly his intended audience.

As for "his life is ruined", well, there are lots of ways for young people to ruin their lives trying to get some sort of recognition and adulation. Some of these ways are even socially acceptable for some reason, and kids are even encouraged and supported in doing them by the adults in their lives. And other people make money off of it.

His future suffering means nothing to them. A post-Christian America is not a kind America.

Most of the medical experts performing the surgeries would have been Christian.

Hanson is a pretty funny guy, however unintentionally.