I'll admit I don't know much about the end of the Romanovs, but the mental imagery appealed to me, so here we are. My hypothesis is that the Romanovs never really understood the threats to their rule because they didn't grasp what was happening in the broader population. Think of them as John Kerry, Janet Yellin, the faculty at Brown and the AP. They talk to each other almost exclusively, so they have a model for the world whose failures are invisible to them. They take steps to preserve their power which are self-defeating because they don't understand how things work.

Yesterday, a new communications channel was opened. Retail investors, equipped with information about highly-shorted stocks, whacked big, institutional investors to the tune of 10-20 billion dollars by buying up GameStop stock. As far as I can tell, the message was not received. Instead, that comms channel was shut down through changes in the ways you can buy heavily-shorted stocks.

To recapitulate a previous post, communications won't stop just because you shut down one avenue.

If you've got a real beef with how things are going, if you've got something to say, Twitter, Parler and Facebook are only mediums for comms, they aren't the comms themselves. There are lots of other ways to make a point.

Every time a deplorable tries to tell you how they feel, they get slammed. They're silenced on campus, they have social justice jammed in their faces at work, their online accounts get demonetized and on and on. When they get slammed, they get a little more radical.

This is unstable. $10,000,000,000 is one heck of a message. Instead of listening and thinking about what was being said, which was trivially easy because the mob told you how they felt on social media, the Elites shut down comms again. I thought this was an excellent summary of the message. 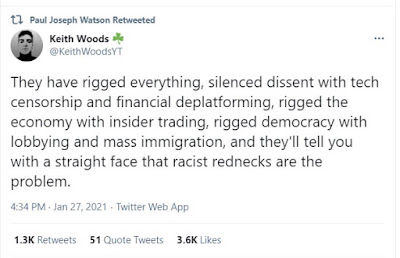 Now I think I need to go find an audiobook about the Romanovs.

Bonus Thought: Everything the GameStop raiders did yesterday was legal. All of it. If you now change the rules in the middle of the game and that cause them to lose tons of money, do you think they will become more or less radicalized?

The shorts will get bailed out and nobody will be held accountable. The reddit folk who outsmarted them will not be able to sell in traditional avenues and get watch their stock price fall. The status quo will struggle, but will be maintained.

Biden and a D congress loves wall street and vice versa. If anything, changes will be made to preserve the status quo (see above post).

As I type this, reddit is going after american airlines and nokia.

Maybe this is all good. Maybe enough people will look at this and will understand just how rigged our system is. And maybe with a little luck will start realizing just how screwed and small the individual is against DC and Wall Street.

We have the Dems left-wingers and Repubs right-wingers actually in agreement in condemning Robinhood for suspending buy orders from small investors, while the centrists are silent. I thought what they did was pretty cool.

The only explanation that makes sense to me is that they don't see other people as people, they see them as static objects.

Actually, they see them as products to be sold.

Every time a deplorable tries to tell you how they feel, they get slammed.

In the original quote, "deplorable" specifically referred to only a fraction of Trump supporters, and she specifically called out the "racist, sexist, homophobic, xenophobic, Islamaphobic" supporters. Personally, I have no problem with you standing up for those who are racist, sexist, homophobic, xenophobic, and Islamaphobic, of course.

psudrozz
Biden and a D congress loves wall street and vice versa. If anything, changes will be made to preserve the status quo (see above post).

Wall Street pours a ton of money into D and R campaigns, and gets a lot of love for it.