Alternate Title: You're not paranoid if they really are out to get you.

Well, that went downhill pretty fast. It took Big Tech all of 9 days into 2021 to get going on crushing online dissent. Yesterday, Amazon moved to dehost Parler while Apple and Google took it out of their app stores. Parler is a free speech alternative to Twitter that has grown like topsy.

I've got a Parler account, but I barely use it. Parler is mostly political ranting, but no more dangerous that what you see from progressive accounts on Twitter. The real problem for Big Tech was not the platform or the tone, but the opinions. They're trying to silence their enemies. It's naïve madness.

I saw these two tweets today and I got cold chills. These two are normally moderate in their opinions and approaches. 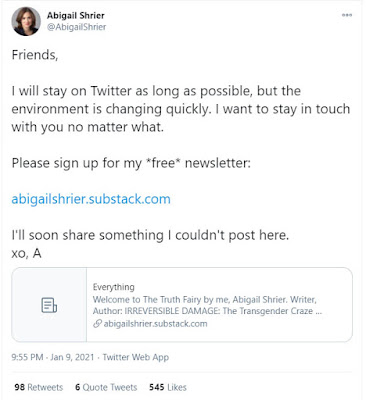 I did screen captures because you don't know if their accounts will be terminated. This is indeed madness.

If you've got a real beef with how things are going, if you've got something to say, Twitter, Parler and Facebook are only mediums for comms, they aren't the comms themselves. There are lots of other ways to make a point.

For example, they howled "RACISM!" at the cops and expected the cops to behave like robots and go right back to work. They didn't and now we've got about 1,000 more murdered blacks because the cops bailed. And still the left is honking BLM. It's been objectively proven a total failure and we're still supporting BLM at the corporate level, in sports, on the news, everywhere.

They don't understand how things work even when they see it working. This is religious madness.

Meanwhile, those people who want to communicate dissent will find other, perhaps kinetic ways. All you're doing when you crush online dissent is pushing the dissent somewhere else.

This is bad medicine.

I haven't opened twitter since the riots. I'm really not missing it.

I have it mostly just to follow sports. But politics can't stand anyone being happy, so you are pretty much guarenteed that someone will put something stupid in any and all threads.

I deleted facebook a couple years ago, and instagram more than a year ago. I don't miss them at all.

Facebook was particularly horrid. My timeline filled with people from high school that I barely remember and weren't really friends then. Meanwhile, I see nothing from my actual relatives unless I went hunt.

When you put on top of that, the personal info that facebook demanded, it was and easy decision.

I'm not sure if I'm done with twitter yet. We'll see.

I'm almost done voting, since there is NO ONE that represents me at all. I am in the politically abandoned party.

Politicians, lawyers, and journalists; those are all extremely negative connotations to me.

I know a few lawyers, and like them, so all of those people aren't horrible.

You know a journalist is doing their job when all ends of the political spectrum are mad at them, for the same article/story.

Politicians are the easiest. They are all...

I don't know why anyone ever thought that Facebook or Twitter were "free speech" media. Back when I first looked into using facebook, it quickly became clear that the algorithm was going to decide on my behalf what I would see, and who would see me. Everything I saw was being filtered, which is another name for "censored". Since I don't want some machine deciding what I "should" be interested in, or who my "friends" really are, that ended in a hurry. Same with Twitter, with the bonus that everything was short, out-of-context snippets and pictures. I hadn't even heard of Parler until recently, but since they seem to be advertising themselves as a refuge for people who got kicked off of Facebook and Twitter for making asses of themselves, that doesn't sound very promising either.

As you say, there are other ways of communicating. Twitter and Facebook are neither desirable nor necessary.

Wherever I post, I'm going to work to make as much of my content beauty, food, hobby or fun related. I won't be able to stop ranting 100% because the temptations will be too great, but maybe the posts can provide some amount of softness in an ever-hardening world.

Twitter is getting creepy for me. This crackdown by the overlords of Big Tech is giving it a very bad flavor. In a way, it's a good thing. Twitter was mostly a deliberate irritant.

Tim, I agree that the filtering was a turnoff. If I follow 120 people on Facebook, I want to see all 120 feeds, arranged in chronological order. I don't need you to filter it for me. Dittos for Twitter. It does that same thing when I look at my stream.

As for Parler being the refuge of malcontents, I'd have to disagree. It's the refuge of the Deplorables. All Big Tech has done with this is confirm that they hate us as much as we thought they did.

To go back to my theme of the last year, the left, including Big Tech, has no idea how anything works.