Living In The Shadows

... makes you big, broad and yellow. Well, at least if you're a cayenne pepper plant.

With the removal of my cotton plants, the cayennes which had shared their bed are now exposed to direct sunlight. While they started out the same size, the cotton grew much faster and much larger than the cayenne and shaded them. The end result were weird pepper plants with big, broad, yellowish leaves.

At first, I wondered if I had a different kind of pepper plant, but something interesting has begun to happen. The cayenne are now sprouting normal cayenne leaves - petite and dark green. Dig this photo that shows both kinds of leaves on the same plant. 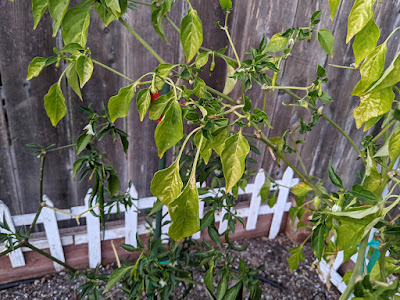 There's a different cayenne plant in the background and it never got any of the big leaves, probably because it was totally buried and never grew much at all until the cotton were yanked. Comparing the two, you can see they are the same kind, but the foreground cayenne actually grew a different kind of leaf in an attempt to harvest as much sunlight as possible.

Left to bask in the sunlight, four of my five cayenne are now flourishing and fruiting like mad. The fifth is being regularly eaten by what must be a Cajun grasshopper. It sprouts leaves and looks to be turning the corner for a week or so and then nom nom nom, the leaves all disappear overnight.

Oh well. At least I'll be harvesting a mess of cayenne peppers pretty soon. As a bonus, I got see what a plant does to adapt to its environment. Yay!

I was always mystified by the whole "plants that don't get enough light get pale" thing. One would expect that, if there was insufficient light, the plant would produce more chlorophyll in order to be sure to catch whatever light is available, which would make them greener. Instead, they seem to do the opposite.

The only thing I can figure is that chlorophyll needs a constant energy input to maintain it, and the plant needs light to do that. And so in that case, when the light levels are too low the chlorophyll degrades away faster than it can be replaced until the concentration drops down to what the available light can support. That can't be all of it, though, because plants that are adapted to growing in shade, like the ones we have on the forest floor around here, tend to be a darker green than the trees are. It is a puzzlement.