It feels like every time you turn around, there's another story suggesting that the country is becoming more unstable. I can't tell if it's confirmation bias on my part or clickbait rubbish from the sources I read, but it seems obvious to me.

Looking around Adobe Stock for a good photo for this post, I found one of a rickety, old bridge. 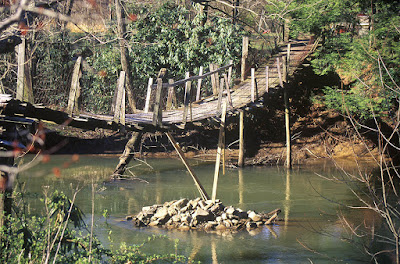 Every time an institution is revealed to be corrupt, a support cracks or a slat falls into the water. When the press chose to hide the Hunter Biden story, that was a support falling down. Confident that the bridge would hold future traffic, the press never went back to replace it by addressing the fears and frustrations of the public.

Using mail-in ballots when a big portion of the electorate told you in advance they wouldn't trust the result was a big support falling into the water. As far as the Elites that jammed the mail-in ballots on us are concerned, that bridge will last forever.

This week, when a couple of relatively minor hedge funds were rescued at the expense of tiny, retail investors, another couple of slats fell. Asked to weigh in on it, the Biden Administration crowed that Janet Yellin was the first female Treasury Secretary, which only mattered to those obsessed with identity politics. What blind hubris to think that was reassuring!

Every time the voices of individuals are silenced or someone gets canceled, that removes support, too. Think of it in terms of the mechanical engineering calculations on that bridge - fewer connectors have to carry more stress as communications channels for the deplorables get cut away.

As more power is handed over to the Elites in the form of government spending, more regulations and giants like Amazon gobbling up small businesses, it's as if we're expecting that bridge to carry heavier and heavier loads. The more you centralize power, the more important institutional trust becomes.

By the way, did you know that Bill Gates owns more American farmland than anyone else? Creak.

I dunno, man. Maybe I need to go back and reread my vows on this blog to fast from the news. This can't be right, can it?

(Makes one last stop to see what some centrist Twitter accounts are saying these days. Hair stands up on end.)

So, I don't think I am reading, watching, or listening to the same things as you are. My online activities generally focus more on science and technology articles, and my recreation is more on the order of reading old novels from Project Gutenberg than watching TV. Which is why I often first hear about whatever the "outrage of the day" is through your blog here.

The thing that is concerning me, is from my kind of "outside" perspective, I am often not really clear about who, exactly is mad at who. Or what their concrete reasons are for being upset. Or what they actually want to have happen instead of what is happening now. It seems to be more of an inchoate rage against abstractions rather than actual specific complaints.

I feel like there are people who are hankering for a civil war, but are unclear about what is actually so terrible about current society that it is worth destroying civilization, killing millions, and blowing ourselves back to the stone age to get rid of. Or maybe they have just convinced themselves that they can somehow replace the current government with something "better", without ever coming right out and explaining what "better" would look like. And this is all being exacerbated by the clickbaiters and the newsmongers, who have found that outrage draws eyeballs, and are pumping it for all they are worth.

I don't have a solution, it looks like a lot of people are just addicted to being enraged, and there isn't a good way to wean them off of it. About all I can do is decline to participate.

When the press chose to hide the Hunter Biden story, ...

NBC News put our an entire article in late October about how they wanted to dig more into the Biden laptop story, but Giuliani wouldn't make copies of the hard drive to share with the press. So, who's really to blame there?

Confident that the bridge would hold future traffic, the press never went back to replace it by addressing the fears and frustrations of the public.

I saw more stories trickle in during December. Did you miss them?

Using mail-in ballots when a big portion of the electorate told you in advance they wouldn't trust the result ...

It was the electorate that voted in the easier mail-in ballot regulations in Pennsylvania in 2018. Not to mention, a lot of the part of "the electorate" you are discussing also thought the 2016 elections were rigged. It's almost like it has nothing to do with the method of voting.

.This week, when a couple of relatively minor hedge funds were rescued at the expense of tiny, retail investors, another couple of slats fell.

Do you think the government should have intervened? If so, how?

Makes one last stop to see what some centrist Twitter accounts are saying these days. Hair stands up on end.

But don't worry. Can keep yanking out supports-- not like the last straw is a thing.