How I Will Measure The Trump Administration

When Hillary Clinton was not recommended for indictment by James Comey, I took down the American flag at our house and replaced it with a Vatican flag. I could stomach Obama's imperial presidency and the Supreme Court nullifying perfectly legal election results, but Hillary breaking the law with impunity was too much. She and her henchmen now belonged to a distinct class of Americans, one I could never aspire to join, one that was above all laws. They had money and respect and power and adulation. They made a mockery of this:


We hold these truths to be self-evident, that all men are created equal, that they are endowed by their Creator with certain unalienable Rights, that among these are Life, Liberty and the Pursuit of Happiness.

Without that, this is no longer the United States of America. It's something new and different, something profoundly evil. Yes, I know, the rich have always gotten away with things, yada yada yada, but to me, this was villainy of a new and completely different type. This was the utter corruption of the legal system from the very top.

Now to the point of this post. Dig this, something I hadn't noticed in the NY Post story about Hillary's maid printing out classified documents.


Santos also had access to a highly secure room called an SCIF (sensitive compartmented information facility) that diplomatic security agents set up at Whitehaven, according to FBI notes from an interview with Abedin.

From within the SCIF, Santos — who had no clearance — “collected documents from the secure facsimile machine for Clinton,” the FBI notes revealed.

Just how sensitive were the papers Santos presumably handled? The FBI noted Clinton periodically received the Presidential Daily Brief — a top-secret document prepared by the CIA and other US intelligence agencies — via the secure fax.

People need to go to jail over this. Lots of people. At all levels. I don't know if I expect Hillary to end up behind bars, but there had better be a wave of arrests, convictions and jail sentences. Dittos for the Clinton Foundation's fraud of a charity wherein Hillary traded favors for monstrous payoffs.

If the Trump Administration's Justice Department pursues these criminals and puts them behind bars, I can probably take anything else that happens. If it doesn't, then it really won't be making things worse if we discover that Trump was using the presidency to line his own pockets to the tune of 9 figures. After all, Bill and Hillary did. 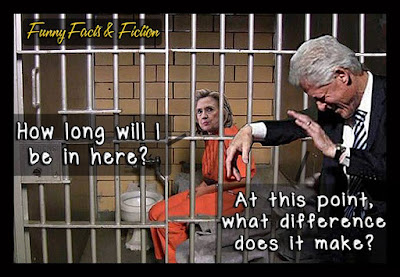 Her treason was brazen and knew no limits. I'm biding my time -waiting to see what kind of cabinet he puts together- before I hope or fear for the next four years. If Hillary goes to jail, I will feel some justice has been served. I'd rather see her make the long walk to the scaffold, however. It's not an unheard of penalty for a traitor/spy.

I actually want Trump to pardon her for all federal crimes already committed, to avoid giving legs to the "win or go to jail" accusation. (And, more importantly, to keep future presidents from giving blanket pardons for everyone working under them.)

And then I want any non-Federal crimes she committed to be turned over to the relevant enforcement groups, and it's not like she's going to stop being a criminal.

Foxie, I understand the sentiment, but I would ask you this: at what level does the disregard for law start? GS 15? SES? Assistant Secretary? Secretary?

Sadly, it's not a matter of level, it's a matter of the punishment has to be done by someone who is not going to do it.

It is Obama's responsibility- and he will not fulfill it, and will actively work to prevent it from happening.

Trump can no more take on that responsibility than you or I could take over discipline of the neighbor's child. We'll have to deal with the stuff when it goes out of "the parents really need to be responsible for him," but we can't stop it.

So a few years ago, I had top secret clearance for a government project. I was just an extra, doing little admin jobs to take a little bit of the load off the projects admins.

People without clearance could be brought into the SCIF but had to be escorted at all times. Classified documents could not leave the SCIF. We had secure computers and non-secure computers and things did not move between them, period. There was a process to put software on the secure network.

It took weeks to get clearance. The Elites apparently don't go through that. Trump as of Wednesday has defacto top secret clearance.

I said often during the election that though there is plenty of debate who the worst modern President is, after this election regardless of who won, there would be no doubt.

Navy gal here, I was on a "secret base." (That's the classification, not that the whole thing was supposed to be secret. But it was still amusing for jokes. :D ) I hear you on the "hm, that isn't what I had to deal with" stuff.

The President doesn't have a security clearance. (Info here) It makes sense if you figure that somebody would abuse the process just to screw with him, or to hide things they know he wouldn't like.

Now, you want examples of the Elites getting special treatment? Look up Huma, Hillary's aid. My husband's clearance was on hold until I could get enough info to clear *my* friends, and it's not odd for someone to be denied a clearance because an uncle they don't even associate with did stupid stuff in the 60s.
Her parents are both big people in the Muslim Brotherhood, and her brother is still big doin's. (unless he's finally died)