When Do We Reassess The Past?

The Democratic governor of a deep blue state is confronting reality, just like Jerry Brown is in California.

Andrew Cuomo, the newly elected governor of New York, seems determined to build a career as a budget hawk. His campaign platform included admirably detailed promises on how to end the state’s budget imbalance, including a pledge to not raise taxes. Even before he was sworn in, the governor-elect was sending a blunt message to the state legislature. This is “about numbers,” Cuomo said. “There’s no Democratic or Republican philosophical dispute here. The numbers have to balance, and the numbers now don’t balance … It’s painful, but it is also undeniable.”

Now that it's become obvious that the progressive agenda of massive government spending, entitlements, benefits, regulations and wealth redistribution has failed, when do we reexamine the arguments of the past and put a stake through the heart of this particular vampire? 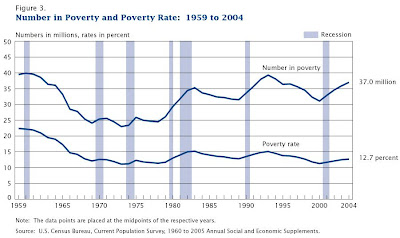 40 years and $14T of FAIL and that's just at the Federal level.
Whatever the goals of the Great Society and its ideological brethren were, a static poverty rate wasn't one of them. So when do we go back and review the rhetoric and logical arguments made by Ted Kennedy and Barbara Boxer and all the rest and conclude that they were wrong? Not just mistaken, but flat-out, mathematically wrong. For 40 years we've fought poverty with government spending and it's now clear that strategy was totally wrong. That needs to be stated clearly, openly and loudly.

Is anyone out there saying that? I can't think of any pundit or politician who has made that his or her central theme.
Posted by K T Cat at 5:44 AM

Erm? I look at that poverty rate graph, and I see it starting at around 22%, then descending rapidly all the way down to around 12%, then holding. It never went back above 15%, and certainly not to the high level that it started at.

In what way is that "not working"? One might argue that the degree of benefit isn't worth the money spent[1], but a persistent cut in the poverty rate of almost half certainly doesn't look to me like "no effect".

[1] One might also argue that maybe the poverty rate of 22% in 1959 was an anomalous spike in the first place, or that maybe the poverty rate was declining in the 60s for reasons that had nothing to do with the government actions (although the timing certainly suggests a connection). But, we can only reach those conclusions if we have more data than is in this graph. By itself, it certainly can't be used to support either of those positions.

The graph is priceless, because if you know a little bit of the history of the 60's (just a little, teensy bit), you know that the Great Society programs did not start to be enacted (much less implemented) until 1965. The full force of them didn't really hit until the late 60's. So the decline Tim points out had nothing to do with the enhanced and federalized* welfare state the dems enacted in the mid-sixties.

In fact, I think it is interesting that the downward drift ends right when the Great Society stuff really gets going. That is the connection that bears scrutiny here.

Unfortunately, as our host has repeatedly pointed out, these programs have probably made poverty worse. They seriously damaged American families (by decoupling family formation from marriage).

It's interesting to speculate how much lower poverty could have gotten without the Great Society. But in my limited experience with the truly poor of this country (helping them in various ways including taking them into my home), I am pretty pessimistic about eliminating poverty. I am reminded of the words of a certain first century itinerant preacher who had something to say about that.

*One little known aspect of this is that the U.S. had welfare programs before the Great Society. They were local (often run by counties). The federal welfare programs (like CCC or WPA) began in the New Deal were ended during WWII.

Jeff: What bugs me about that graph, is that it doesn't say squat about what the "normal" poverty rate was prior to 1959. Poking around a bit, I'm not so sure that anybody even measured the poverty rate before that.

The question I want answered is this: Was the 22% poverty rate in '59 a fluke, or a typical rate up to that point?

Does anyone have an answer to that question?

If we can't answer that question, I don't really see where we can say whether the anti-poverty programs "worked" or not.

Even if there was no data at all prior to 1959, like Jeff says, the static nature of the poverty rate from 1970 on tells the story clearly. Government spending has risen enormously since then with no discernable impact on the poverty rate. Dittos for measures of K-12 educational performance. We've managed to drive ourselves $14T into debt in exchange for nothing at all.

Let's say I have a compression spring sitting on the table in front of me. It is a foot tall in its uncompressed state.

I press down on it, and am able to compress it down to 8 inches tall.

As long as I keep the force on it, it stays at 8 inches, but will spring back if I let go.

The graph of spring height vs. time would look pretty much like the one presented for poverty rates.

Claiming that I am having no effect on the spring, because its height is not changing over a long stretch of time, strikes me as being, well, wrong.

Now, pressing down on the spring is not the most efficient things I could do to keep it short; if I could find an appropriate weight to set on top of it, then it would stay compressed without continuous effort on my part. But that's an question of means to the same end, not of whether the end is actually being gained.

So if you want to argue that there are better ways to achieve the same levels of poverty reduction, that's different. But I'm not seeing any actual support for the claim that no poverty reduction is being achieved.

Tim, I don't understand your analogy. The compression of the spring occurred before you put any significant force on it at all.

KT,
This is a complex subject, as the comments show. I also wonder what we are seeking to measure. In these discussions, the value of food stamps, housing subsidies and the earned income credit are not usually included. If their true value were added, the poverty rate would be extremely low.
However, if the discussion centers around the question, "what is the trend in earnings" among the poor, then the graph is more meaningful. However, one must also consider that the official statistical definition of poverty has also been changed over the years, and I am not sure how that is accounted for in this graphic.
I don't have any specific point, except to say that I have always found this to be a very difficult area to analyze.
The conclusion I draw from other economists that I have read is that the poor in America aren't poor in the sense that Haitians are poor, but there has been a stagnation of wages in this group.