Japan Promises To Help Save The Euros!

From Paris to Athens, they're dancing in the streets shouting out, "We're saved!"

Japan plans to buy bonds issued by Europe’s financial-aid funds, its finance minister said, joining China in assisting the region as it battles against a debt crisis that prompted bailouts of Ireland and Greece.

“There is a plan for the euro zone to jointly issue a large amount of bonds late this month to raise funds to assist Ireland,” Finance Minister Yoshihiko Noda said at a news conference in Tokyo today. “It’s appropriate for Japan to make a contribution as a leading nation to increase trust in the deal. We want to buy more than 20 percent.”

Ah, Japan. The nation with more than 200% of GDP in debt and whose budget this year relies more on borrowing than taxes for its revenue. They're riding to the rescue of Europe and buying bonds. And where will they get the money to buy these bonds? Why, they'll borrow it, of course! 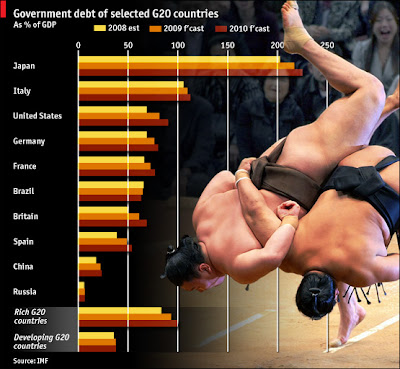 Take that, Euroskeptics!
Borrowing. Is there nothing it can't do?
Posted by K T Cat at 6:15 AM