Roubini on Greece (and Spain)

Yesterday, I listened to this panel discussion of the Euro crisis featuring Nouriel Roubini. It's worth hearing what Nouriel has to say and if you start at about 22:00 and listen until Nouriel is done, you'll have a much clearer idea of what's going on in Europe. It will take about 10 minutes, but is well worth it.

If you don't want to watch or the terminology is too dense, here's the synopsis. Greece has borrowed money until they can't service their debts. Also, they aren't competitive in the world market - their wages are too high relative to what they have to sell. You can tell this because they have huge trade imbalances. Greece is insolvent - that is, it's not that they need a loan to carry them through bad times, it's that they don't make enough money to make their loan payments. Bailing them out now will just sign you up for another bailout later.

If Greece is in bad shape, Spain is worse. I hadn't known this before, but Spain is an economy too large to bail out. It has the eighth largest economy in the world. Just as there is no IMF for Japan or the US, there probably isn't an IMF for Spain, either, especially in a fiscally exhausted world that has borrowed and spent in a futile pursuit of compassion™ for decades. Spain's unemployment rate is over 20% and their labor market is even more uncompetitive than Greece. Spain's deficits and debt are similar to Greece and their bonds are teetering on the edge of the abyss already.

Nouriel compared Greece of today to Argentina of the 90s and Greece is in far worse shape. Argentina collapsed.

All of this is applicable to the US, save for the fact that we can print money to pay our debts, a fact with limited appeal since printing money would annihilate all savings in the country and eliminate our currency's supremacy in the world. We are boxing ourselves in to a single solution that will be an unpleasant, one-shot fix.

If we want to escape the noose that is tightening around our necks, we need to sell off every privatizable business our government owns - GM, Chrysler, student loans, health insurance, mortgage giants Fannie and Freddie and so forth. We need to end every subsidy that encourages American companies to work on things that are unprofitable like alternative energy. We need to reduce the minimum wage so we are competitive once more in the global economy. Finally, we need to slash the pay of government workers and reduce promised pensions to both government employees and social security recipients, either by reducing benefits or pushing out retirement ages.

We are doing exactly zero of these. Socialist Spain is doing almost all of them. They get it. We don't. 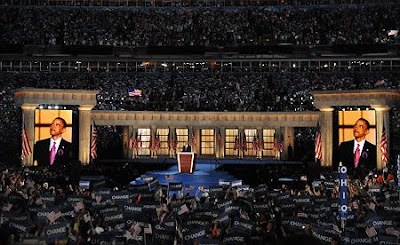 It's a good bet that almost none of the people who were in this stadium will ever understand what's going on financially. Chances are good that you will, whether you want to or not.
Posted by K T Cat at 7:00 AM

Jeff, I think it's all a matter of your investors having confidence in you. That $1.3T blast of money was a one-time deal. If we reach a stage of insolvency where we have to have a steady stream of freshly minted unbacked cash to pay our bills, people will start selling off Treasuries and interest payments on our debt will rise faster than we can print.

Right now, we're benefitting from the turmoil in Europe. Our Treasuries are in demand as people flee an uncertain Euro situation.

I've been scanning Greece news (http://www.socialnews.biz/tag/Greece) to see whether other pundits take Roubini's view. There seems to be quite a split of opinion on this. Hard to judge sentiment.

Anon, the panel had two opinions that differed from Nouriel's. However, the only opinion that counts is the one of the investors and it looks like they think Greece is insolvent.

I agree that the U.S. national debt ought to be reduced sometime, but there is no need to panic on account of its present size. The U.K. national debt just after WWII (and after the Napoleonic wars over 100 years earlier) was over 200% of GDP. That was not a huge problem. The U.S. and U.K. national debts are nowhere near 100% of GDP yet. See graphs at the bottom of this F.T. article.

Jeff Burton wants to know if we can continue to print money to pay off the debt. My answer is that I don’t see why not. Paying off the national debt is easy: pay it off with a combination of money printing and extra tax. The former is reflationary and the latter deflationary. Thus the debt can be paid off while adopting whatever deflationary/reflationary stance is regarded as appropriate.