Welcome to another World of Good here at the Scratching Post! This week we're going to highlight one of my favorite charities and one I look forward to participating in when my own children have moved out.

The Big Brothers program brings together adult men with children who do not have a father present in their lives. Here's how they describe themselves.

Big Brothers Big Sisters is the oldest, largest and most effective youth mentoring organization in the United States. We have been the leader in one-to-one youth service for more than a century, developing positive relationships that have a direct and lasting impact on the lives of young people. Big Brothers Big Sisters mentors children, ages 6 through 18, in communities across the country - including yours.

The Big Brothers Big Sisters Mission is to help children reach their potential through professionally supported, one-to-one relationships with mentors that have a measurable impact on youth. 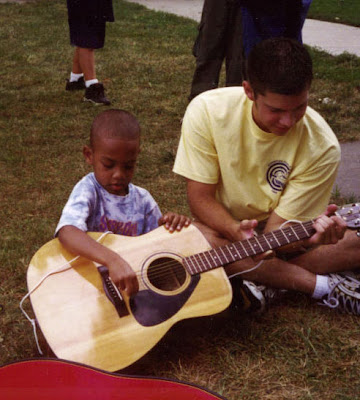 Wild parties are a staple of the Big Brother program. Here, two partners rock out over cookies and milk.
In my own life, I've managed several Little League teams and worked with young boys who don't have a father in their lives. From my experience, absent the support and guidance of a caring, adult man, these boys lacked the confidence that came with masculine skills. On my teams, the fatherless boys were always the poorest players and everyone on the team knew it. That was not a fun environment for them.

I found that a little extra effort on my part in the form of private lessons on pitching or hitting gave these boys the skills they needed to participate as peers on the team. The resulting confidence changed their attitudes and many who had been head cases became friends with their team mates.

Of course it didn't hurt to have two or three extra mashers in the lineup and another starting pitcher or two. I wrote that as a joke, but now that I look back on it, I'm realizing that every child likes the feeling that they are constructively contributing to a group effort. There's a solid self-confidence that comes with performance distinct from the self-esteem that comes from just knowing that someone cares. 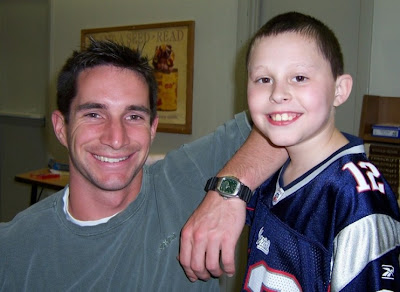 Despite an extensive screening process, some New England Patriot fans sneak in.
Enough about that. Here are some stories gleaned from the Big Brothers site that I think you might like.

Mitchell and I have been matched on September 8th, 2005. There are many things we have done together and now have a lot of memories. One day we got up early and headed to Arlington's Portage Creek Wildlife Area to volunteer at Earth Day Tree Planting event. It was a hot, sunny summer day full of hard work, and in the end a newly renovated piece of environment. There are many other get-togethers that stand out: going to the Wild Waves, going ice skating, attending Silver Tips games, hanging out at a local park, and watching a movie together are some of the things that both of us enjoy a lot.

"The match is perfect!" said Jennie, Mitchell's mother. "I could not have asked for a better Big Brother for Mitchell. Mitchell always has something fun to tell me when he gets home from spending time with Anton. The fine art of leaning on a lamp post checking out the girls is a learned skill.
Here's another story.

"We were walking along and Brad saw a dead jellyfish in the muck. I said 'Why don't you get that stick over there and poke it.' He looked at me with eyes as big golf balls and asked, 'Can I do that'? At this point I realized a male perspective had been absent in his life. I said, 'You bet, you can even throw it back into the ocean and toss some rocks into the water.' The rest of the day was spent with him digging and climbing and throwing rocks and poking dead stuff with sticks. I returned him to his mom dirty," writes Kurt.

For nearly 3 years, Brad and Kurt have biked through new scenery, explored beaches, caught a flick or two, and hiked the damp forests. Kurt's shop provides the tools and space for the two to create bird houses, a pinewood car, and an excuse to play with ferrets.

Brad is a very intelligent and talkative child. He has particularly enjoyed the chance to ride bikes and build projects. Brad's mother Becky said, "It's hard to remember all the activities that they do together." Brad is always happy to see Kurt. "He is able to talk to Kurt about everything," Becky commented, and added, "they are a perfect match and Kurt is awesome."

And what are the results of the Big Brothers program?

Bigs and Littles have fun together — and create memories that last a lifetime. We call it “Little moments … Big magic.” Research on our volunteer programs points to the powerful, positive, lasting impact Bigs have on children’s lives. Littles are: 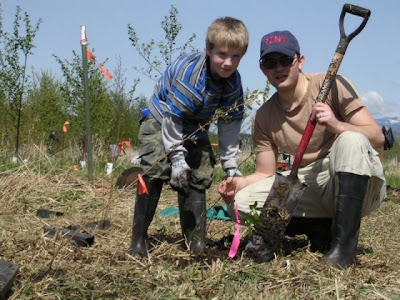 Mom's favorite vase is quietly buried in the back yard after some horseplay inside.
You know, as I think about it now, there are some weekends where I've got some extra time. I wonder if I should just start volunteering now? If I do, will I see you there, too?

For more WOGs, a description of why we WOG and an opportunity to join the WOG Squad, see this post.
Posted by K T Cat at 4:12 AM