Thanks to A Tic in the Mind's Eye, we have the World of Good Blogburst on Wednesdays.

My parents are staunch conservatives. Catholic midwesterners both, my father was a combat pilot and career military officer and my mother was a homemaker who raised four children. Without thinking, you could classify them as stereotypical Republicans. Like all of us, however, they are very complex and thoughtful people.

Both of them are naturalists in the strictest sense of the word. Their property has been designed to preserve the native flora and fauna and they have taken great care to grow endangered, native plants and feed and care for native birds. My father even has a system for raising from seed some native plants and planting them in the wild when they have matured.

Today I give you a story that also defies stereotypes, but one that will not surprise anyone who has been involved with the Boy Scouts.

The only time we hear of the Boy Scouts in the news these days is when someone is protesting the fact that they refuse to have gay scoutmasters. Their opponents paint them as a reactionaries in need of enlightenment.

Today's story is of a Boy Scout troop that works to help endangered sea turtle hatchlings make it from the nest to the sea. The full story is here. Here are some excerpts.

The 11 Scouts from Troop 171 (chartered to the Williamson's Chapel United Methodist Church, Mooresville, N.C.) were on their annual mission to help save loggerhead sea turtles. They carried buckets to use in assisting newly hatched baby turtles on their perilous journey from nest to ocean, and huge calipers for measuring any mother turtle they might encounter nesting in the remote setting.

For Troop 171, the trip has been an annual event for most of the past eight years, thanks to former Scoutmaster and current committee chairman David Nagy, a 24-year Scouting veteran. Ken Teeter, who succeeded Nagy as Scoutmaster, says the Scouts enjoy this special adventure, which for some can be a life-changing experience.

The loggerhead sea turtle was named a threatened species by the federal government in 1978, when the mortality rate for newborns was nearly 100 percent. Since the turtle protection project began in 1982, more than 2,500 nests have been saved on Pritchards Island alone, and—thanks to the program and volunteers like Troop 171—60 to 80 percent of newborns—more than 240,000—saved.

The Scouts focused on their job for the night: escorting the hatchlings out to the sea.

Scouts combed the nearby grasses, looking for stragglers. One boy found a baby turtle tangled in a prickly pear cactus and removed a number of inch-long needles from it. As the hatchling then squirmed on its way as if nothing had occurred, the Scout looked on with pride.

Another boy happily rescued another turtle struggling in a deep depression with a three-foot yellow snake lurking nearby. 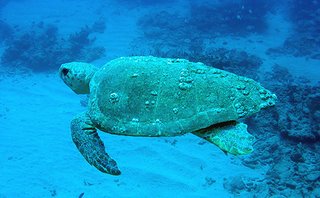 Read the rest. What a great group of kids and parents and volunteers. Scout organizations all across the country are similarly charitable.

When I came across this story, I immediately thought of my parents. A socially conservative organization committed to environmentalism. People are complex, aren't they?

Previous World of Good posts have involved the US Navy, the Royal Australian Navy, a Catholic High School in Nebraska and Hospice.

KT, it's refreshing to see someone sticking up for Scouting. Thanks from an appreciative Eagle Scout.

We are state certified tree nursery specializing in native plants and trees, shrubs, fern, and perennials as well as pond plants and wetland mitigation species.