Dinosaurs Can Drag You Down

In previous posts, I have shown that race and politics are irrelevant when it comes to social issues. I have also claimed that the ACLU is a dinosaur. Many others in the blogosphere have proven that the MSM is a dinosaur.

France is showing that dinosaurs can drag you down. No Pasaran is giving frequent updates from a country where the dinosaurs have accumulated so much power and so much momentum that they cannot be stopped short of a prolonged national catastrophe and perhaps not even then. 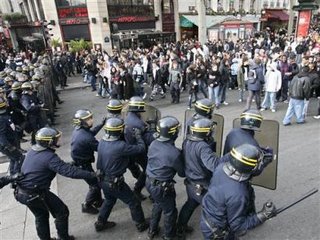 Dinosaur Attack! French student-sauropods confront the modern world with predictable ferocity.
In my terminology, dinosaurs are those organizations and institutions that have outlived their usefulness. The problem with dinosaurs, as is being shown in France, is that they retain influence over decision-making bodies and help the nation squander precious resources on worthless or destructive efforts.

Evolution is Scary! A herd of dinosaurs led by Rep. Cynthia McKinney tries to fight the upcoming ice age by claiming her problems come from racism.
With total statistical certitude, the dominant social problem in the US today is the breakdown of the two-parent family. Anyone that addresses social issues from a point of view other than that is a dinosaur. That means that the NEA, the NAACP, the ACLU and many, many others are all dinosaurs. There is no government solution to this problem. It’s a societal problem and can only be solved by changing social attitudes. Social attitudes can only be changed by national awareness. None of the dinosaurs are working on this, since their power stems from the public believing the opposite.

The MSM is the lynchpin of the whole problem. They continue to frame debates in outdated terms. For example, Jesse Jackson is still a staple on their news programs and they continue to talk about race as if it were a determining factor in society.

The MSM has got to be revectored and soon. This video and the fact that ABC News was sufficiently self-aware to show it is a good sign. It is a single good sign in the midst of many, many bad ones.
Posted by Jacob the Syrian Hamster at 6:58 AM