It's Time For A Modular Pride Flag

I was attending a meeting at work a while back when someone walked into the room carrying a pride flag coffee cup. All at once, I wondered why he felt the need to let us all know what kind of sex acts he likes. I mean, it's not like I carry a coffee cup with a flag showing how I'm into threesomes with marsupials.

Hmm. I think I said too much there. Oh well.

As the number of genders and social justice causes multiply like bacteria on a cloth mask, demands have grown to change the pride flag to be more, well, inclusive. The flag below is a current candidate. 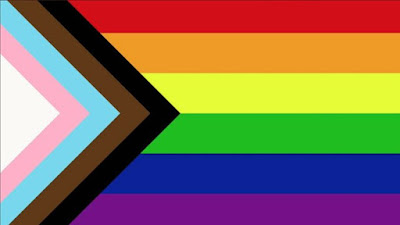 As I understand it, the rainbow symbolizes God's wrath against Sodom and Gomorrah and the triangles and angly, pointy bits symbolize the place where you are supposed to insert your credit card to make a donation. Each color is chosen to represent an interest group who is so oppressed that Proctor and Gamble have had to devote millions of dollars of marketing funds to let you know they join with other multinational megacorporations to protect you from whoever it is who looked at you funny a couple of weeks ago.

Simple mathematical reasoning tells us that this flag is not sustainable. After all there are 14 23 37 66 73 genders now. God only knows how many oppressed subpopulations there are. Logically, each should have it's own color on the flag, otherwise the flag won't be inclusive enough. There's no way we can fit them all in, so the flag is doomed to be discriminatory as it is now. I think I've got a solution for this.

Let's go with personalized, modular pride flags! Check out the conceptual design below.

We'll go ahead and use the modern pride flag as a starting point. As the internecine catfights rage and this group or that is scratched and bitten until they leave the hair-pulling scrum, we'll have to change the base coloring scheme. One assumes that some kind of equilibrium will be reached and the flag, if not all the wavers, will become stable. Until then, this is a decent starting point.

The key is the spots along the bottom, not to be confused with the venereal diseases that might cause the same sort of thing, if you know what I mean. Those are places to put your badges. And yes, you will need some stinking badges.

Each badge will represent your most recent sexual or political act. They will be arranged chronologically, from left to further left. As the days go by, you will have to modify the flag to show what you've been doing. Those spots will be made of Velcro, if you can spare some from your furry costume. That way, you can add and subtract badges as you like.

For example, Father James Martin's flag this week would have the standard colors with badges across the bottom representing:

Is this over the top? Nah. If you feel the need to use your coffee cup to let everyone know you like to roger other men and if every degenerate, sadomasochistic fetishist feels the need for pride flag representation coloring, we might as well go all the way.

If you know what I mean.

Oh, kind of like the old alleged code of hankies-in-the-back-pocket by which pre-AIDS gheys advertised what they were shopping for?

A few years ago, I saw an online ad for a "shirt of many colors", with the colors looking like spilled paint on the shoulders and transitioning to straight lines on the torso.

I thought, "Cool! I could see me wearing that!"

And then I remembered: "Damn! No I can't, as it would be taken as a political statement I will never make."

I was attending a meeting at work a while back when someone walked into the room carrying a pride flag coffee cup. All at once, I wondered why he felt the need to let us all know what kind of sex acts he likes.

Why would the style of coffee cup tell you that? At most, it tells you a political position. I carry ride stuff from time to time, and sexually I'm much more Catholic than you.

Ilion, the key is to never fly an outdated flag. With my idea, your flag would never be outdated!

And that is a key point, as what is 'approved' or 'disapproved' changes so quickly.

It's all about being inclusive, my friend.

Hmm. Maybe the flag should just be that cement-gray color you get when you blend all the Play Doh colors together like my kids always did when they were very small.

="It's all about being inclusive, my friend."=

I think it's more about militantly proclaiming how "inclusive" and "tolerant" one is.