In Defense Of Cultural Imperialism

A few years back, I got to know a Navajo woman. We had a couple of talks where she told me how proud she was of her Navajo ancestry. She was, err, opinionated and held very strong feelings about certain groups of people. Wanna know who she hated the most? The Apaches.

Right now, I'm making my way through Empire of the Summer Moon, a book about the Comanche and their eventual contact, conflict and war with America. It's a terrific read. I was inspired to get into the topic by this post from Sarah Hoyt over at Instapundit about a book discussing the Zulus. Here's what intrigue me.

(After a deep dive into African history), what became very clear to me is that whenever civilized (in this case defined as post-tribal) humans collide with tribal humans, tribal humans lose. (The tribal people) use the techniques that work in between tribes, imagining that their adversaries are also a tribe:

They start off with unimaginable massacres and horrible evil in the belief that this will cause the adversaries to back off... (T)he more atrocities they commit the more they aggravate the anger of the civilized people.

And then at some point the post-tribal people lose it.

What comes after is usually horrific and causes college social studies majors to cry centuries later.

That's a good match for what I'd read from Julius Caesar and Geronimo. Caesar wouldn't slaughter and enslave a community until they really ticked him off. Geronimo never understood the concept of the nation and saw every Mexican village he attacked as its own tribe. He kept raiding and killing until the US cavalry finally stomped him into the dust.

Getting back to the Comanche, they were typical of the Plains Indians. Warlike and savage, when they conquered another tribe, they tortured the men to death, gang-raped the women and adopted the children. No doubt the Apache treated the Navajo in the same way, hence my friend's hatred.

The Comanche were originally third-rate, cowering losers until they got horses dialed in and learned to fight from horseback. While other Indian tribes rode horses, they typically fought dismounted. The Comanche had a tremendous tactical advantage because they could shoot arrows while riding.

Over a 150-year period, the Comanche went from losers to empire. By the time they ran into the Americans, they controlled a lot of territory and had no peers among the other tribes. Prior to their contact with the US, they had repeatedly mauled the Spanish and Mexican armies. 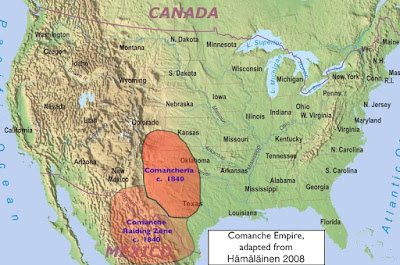 Cultural Imperialism Can Be A Good Thing

Once contact had been made, the Comanche were toast. A civilized society cannot have savages like the Comanche on their borders. Just like Caesar with the Germans, the US and Mexico with the Apache and plenty of other examples from history, it wasn't reasonable to expect a population who wanted to spend their time planting and building to have to cope with endless raids from tribal people who were perfectly happy to massacre and loot. At some point, the cost to rebuild and fortify settlements becomes too high, the exhaustion with the savagery too much so the legions or cavalry are called out and all rules go out the window.

In our times, you can see the same thing happening in Europe as the Muslim population increases.

“Anybody who thinks that Islamization is a matter of just one issue cannot count. Mass immigration has enormous consequences for all facets of our society. It is a disaster in economic terms, it affects the quality of our education, increases insecurity on the streets, leads to an exodus from our cities, extrudes Jews and gays and rinses women’s emancipation through the toilet."

June 20, 2021 - A typical Sunday afternoon on the Venice Beach Boardwalk. Violent mentally unstable people are left to wander about, and one of them attacks an elderly performer for the second time in as many weeks. She was cuffed briefly and then released to wander and repeat. pic.twitter.com/vCBNmIosSV

When incompatible cultures collide, someone is going to imperialize.

Random thoughts with, i guess, integration as the connecting theme.

Is it possible that cultural imperialism is used as a pretext for unnecessary violence, at times?

The more 'advanced' a society is, the stronger its military might and this explains that but should the reflection stop there?

Is there room for tolerance and patience?

i agree that integration is complicated and can take time but it's worth the effort. No?

Speaking of the Netherlands and its diversity, a nice (real) story is the Hiding Place because it's a nice example of a courageous fight against a special type of cultural imperialism.
"If a mouse lives in a cookie jar, that doesn't make him a cookie!"
If you see someone 'different', that doesn't make him or her (automatically) illegal. :)