If you want to know why so many people are fine with the illegal immigrant invasion force entering the country, take a look at this. 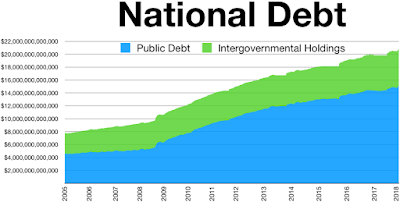 We can have whatever we want, simply by printing money and/or issuing bonds. Taxes don't go up when spending goes up, so policy issues are decoupled from fiscal reality. In the short term, that is.

I saw one of those quote-photo memes this morning saying something about how we should send judges and lawyers to the border instead of soldiers so we could process the immigrants instead of turning them away. The chick who posted it was going to feel no ill effects from letting them in and felt guilt about closing the door on them. Why not be compassionate if it's free? Fight the HATE!

However, if letting them in socked her with a higher tax bill, she might see things a different way. At least there would be another side to the debate, a side not filled with HATE.

In case you're one of those people who wants to make everything about Trump, I'll let you know I'm no fan of him in this regard. A one trillion dollar deficit in the middle of one of the greatest economic times in our history is unconscionable. Unfortunately, there is no meaningful fiscal conservative political movement any more. We're all drunken sailors now.

Until that changes, and I hope it does when we see Japan or Europe go over the edge, these immigration debates will be all emotion and no substance.
Posted by K T Cat at 6:34 AM