So Peter Bethune is on his way to Japan to face charges.

An anti-whaling activist from New Zealand is in custody on a Japanese vessel and will be taken to Japan to face charges after secretly boarding the ship as part of a protest, officials said Tuesday.

Peter Bethune, a member of the U.S.-based Sea Shepherd activist group, jumped aboard the Shonan Maru 2 from a Jet Ski on Monday with the stated goal of making a citizen's arrest of the ship's captain and presenting him with a $3 million bill for the destruction of a protest ship last month.

This was in response to the ramming of the protestors' ship, Ady Gil Here's a summary from the breathless narrative on the Sea Shepherd site.

Six crew crewmembers, four from New Zealand, one from Australia, and one from the Netherlands were immediately rescued by the crew of the Sea Shepherd ship Bob Barker. None of the crew Ady Gil crew were injured.

The Ady Gil was a lovely, expensive craft, purchased no doubt with the contributions of many. Here's what's left of her. 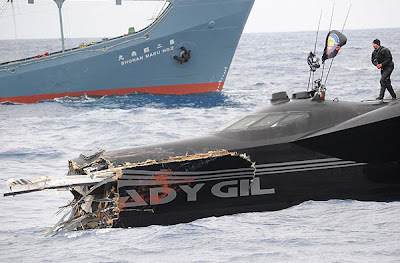 I'm sure there will be all kinds of yapping about how the Japanese are cruel savages and violent and killers and all the rest. Whatever. Pete and his crew all knew what they were doing and hamming it up for the cameras by getting their boat T-boned and their skipper arrested were part of their little play. Good for them. Looking at the photos of the Ady Gil, it's impossible to conclude that they didn't let it get hit on purpose.

Of course, they counted on the Japanese behaving in a lawful and civilized manner. Pete might have been a bit more circumspect around them had they behaved like they did in World War II. Petey might not have been so brave had they hauled him off to dinner.

Many written reports and testimonies collected by the Australian War Crimes Section of the Tokyo tribunal, and investigated by prosecutor William Webb (the future Judge-in-Chief), indicate that Japanese personnel in many parts of Asia and the Pacific committed acts of cannibalism against Allied prisoners of war. In many cases this was inspired by ever-increasing Allied attacks on Japanese supply lines, and the death and illness of Japanese personnel as a result of hunger. However, according to historian Yuki Tanaka: "cannibalism was often a systematic activity conducted by whole squads and under the command of officers".

Oh well. I guess your definition of "atrocity" is all relative.

As for the whales, are they endangered? If not, then what's the difference between whaling and catching tuna?
Posted by K T Cat at 1:13 PM

You really think they let the Japanese sink their boat? The footage I saw, (linked on my blog), showed the Japanese changing course, veering to the left of the screen, toward the other vessel.

Bahh! What a bunch of wimps. In the old days, the Japanese would have sunk the boat and then eaten the crew.

Ah, the classics! Why does this remind me of Barry? ;)

Wow, that is just flat out incredible!

Man, that is one expennnnnnnnsive boat!

I formed my opinion of the Sea Shepherds in the first season of Whale Wars. The captain had some of the crew members risk their lives to illegally board one of the whaling ships. Then he immediately called everyone he could to say his crew had been kidnapped. He's a 'drama king' who doesn't care about the people in his care.
I've also seen him take their ship into ice flows. The hull was taking such a beating that the discovery cameraman abandoned his camera in the hold to seek the relative safety of the deck.
He is nuts and so are the people so deluded as to follow him.

Only seen one ep.

Elf and I were sick from the safety violations on just the ship-- when two techs from an LHD can see what you're doing wrong.....

Ah yes, foxfier reminded me of the episode where the navigator was too stoned to understand basic navigation.