Welcome to another World of Good here at The Scratching Post!

Mark Elliot is a radio talk show host from Canada. I came across his site, People Helping People while searching for information about nematodes and flatworms.

Well, not really. To tell you the truth, I can't recall exactly how I found him, but I can tell you that I'm glad I did. I digress.

Mark Elliot was a very successful disc jockey in Ottawa who became addicted to alchohol and drugs. Here's a profile of him from a Toronto Sun article.

Remember Dr. Johnny Fever? Well, Mark Elliot is just like that guy -- the stereotypical veteran radio jock. Anyone who grew up in Ottawa will certainly remember him fondly from his decade or so on top of the ratings on CFRA doing the coolest evening rock show...It wasn't until he lost it all that he realized he was a drug addict and an alcoholic who had thrown away an amazingly successful high-profile life..."You name them, I have partied with them," he said of rock stars. "I snorted a radio network up my nose. I was leading a double/triple life. I was nuts."

Mark Elliot, sober.
Almost everyone suffers crushing blows in life from time to time. We all struggle with our weaknesses and fight through our recurring failings. Mark's addictions cost him dearly. Here's a bit more from an Ottawa Citizen article.

Mr. Elliot's co-workers and bosses could see he wasn't eating -- at six-foot-four, he weighed a mere 140 pounds. But at first they turned a blind eye. "I was a star performer," Mr. Elliot explains. And why mess with success?...In 1987 a new general manager arrived at Mr. Elliot's radio station and did the best thing for him -- she fired him. Mr. Elliot went into rehab at Brentwood Treatment Centre in Windsor and got clean.

As a recovering addict he now shares the wisdom gained from his own failures with others. He hosts a radio talk show (see his website for details) where he gives advice to callers, many of whom are addicts themselves or are in relationships with addicts.

Many talk shows focus on the hypocrisy of politicians, entertainers or sports figures. For example, Christian politicians caught in adultery are frequently attacked on the radio as hypocrites. Rather than flee from accusations of hypocrisy, Mark acknowledges his own failures and uses them as lessons to instruct his listeners. We all sin. It's part of being human. If we try to avoid accusations of hypocrisy by failing to continue to hate sin, even the sins we ourselves commit, we make sin more acceptable to all of us.

In learning from our failures or vicariously from the failures of others, we become better people. By sharing his lessons on the radio, Mark educates a large audience about the causes, dangers and methods of recovery from addiction. I don't know Mark's religious beliefs, but I would suggest that his concern for those caught in the grips of addiction thoroughly embodies Christ's teachings to care for our fellow man. 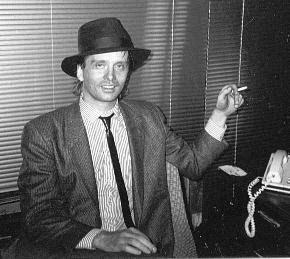 An earlier Mark Elliot, not quite so sober.

"Howard Stern and I are aiming at the same audience -- the sewer," he jokes. But in that sewer, he said, there are a lot of good people who need help. His show is designed to do that. Sober for the past six years (it would be 13 years if not for a little slip in the middle), the 46 year old has a theme he regularly puts across: "Fight like hell."

If they do, he says, they can get that second chance. He's living proof. And proud of it.

Mark believes in the people working towards recovery. His show devotes itself to that. Truly, he's doing a World of Good.
Posted by K T Cat at 4:39 AM

Hi, KT!
Very interesting article. I had never heard of this guy -- and if he is like Howard Stern, that would explain why I never heard of him--it's not my cup of tea. But it is interesting that he is reaching out to help addicts among his listeners. I would hope that he has a conversion experience as well and hopefully God can use him to bring the Good News to these poor people as well.

I happened to be in a "bummer mood" today doing some research and ran across this article for the first time. Better late than never, huh?
Thank you for the kind words and for your sentiment!
It made my day!
The radio show continues to prosper and now is in it's 21st year, but I don't feel like I'm getting older.
The problems only get worse and sometimes too often tragic.
markelliot.com is more or less closed down, but I have regular feeds on Twitter and facebook. Plus you can listen to the podcasts at https://soundcloud.com/markelliot77

Thank you again for your kind words!
Mark Elliot

Mark, that really meant a lot to me. Thanks for leaving that comment. God bless you, sir!