Transparency at The New Republic

The New Republic (TNR) has been running a series of posts written under the pseudonym Scott Thomas that purports to reveal the sadism and brutality of our troops in Iraq.

It's absolute garbage from beginning to end.

TNR has failed to check into many of the technical details in the story and has clearly been taken in by fraud. That has been adequately detailed elsewhere. Personally, I am deeply disappoined in TNR. We used to subscribe to it and I always saw it as a top-tier journal. Its atrocious and unprofessional behavior has been dealt with elsewhere as well.

What strikes me in all of this is that open communications with the press are not bidirectional. That is, the reporters at TNR can call up companies, government agencies and people and get reasonably good sources of factual information. If, for instance, a reporter wanted to learn about the drug development process at Pfizer, they could contact the public affairs office there and eventually speak to some researchers and have a fairly candid discussion. Similarly, TNR could have called Aberdeen Proving Ground (APG) and would eventually have been put in touch with the engineers who performed the acceptance testing on the Bradley Fighting Vehicles featured prominently in their story. I know, because I've done this where I work. The conversations are candid, pleasant and informative for the person visiting. 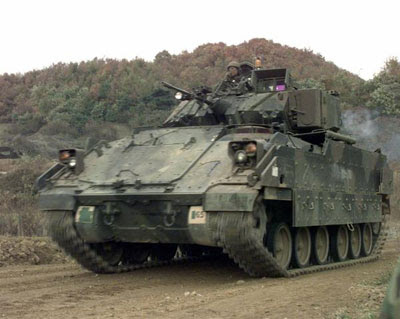 A Bradley Fighting Vehicle swerving to kill dogs and small children. Err, maybe not.
Does it work the other way around? If the public affairs officer at APG called TNR to speak with the editorial staff and reporter and ask just how they came by this story, would they be treated to the same level of transparency? That question has already been partially answered as other publications have begun to research TNR's story. The results have been disappointing. I can understand that the press needs to protect their sources to some extent, but it's the transparency of the process of fact-checking at TNR that I wonder about.

Wouldn't it be interesting to try this out?
Posted by K T Cat at 5:10 AM