Feral Cats at a Bird Sanctuary

I just got back from a bike ride around Mission Bay and out to the end of the Mission Beach jetty. The area around the jetty is a sanctuary for coastal wetlands birds. On the jetty is a colony of feral cats. I believe that most of them have been spayed. Despite this, I still think that they're an environmental problem. As much as I love cats, I think the whole colony ought to be wiped out. 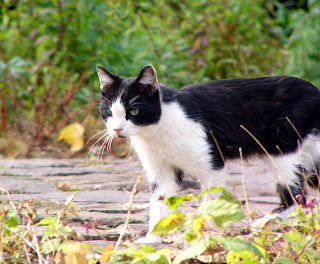 Lots of the feral cats look like this mangy fellow.
Cats are not native to San Diego. They represent a significant change in the predator ecosystem and a significant threat to wild birds, lizards and rodents. As development has proceeded in San Diego, wild, open spaces have vanished almost entirely. A reduced habitat and the introduction of a huge number of predators seems to be contrary to any concept of conservation. I know that kitties are cute and that wiping out a bunch of them seems cruel, but how cruel is it to allow the wild birds and rodents to be slaughtered? Death is death and allowing the ferals to stay just spares one and kills the others. I'd suggest adopting them, but given our current population in shelters and how hard it is to domesticate ferals, I don't think this is realistic. I also don't think relocating them makes sense. All you'd do is introduce a colony of non-native predators somewhere else.

What do you think?

Photo used without permission from canalphotos.org.

Update: Surfing the web, I find lots of wishy-washy mumbling going on. The Sierra Club wants to study the situation more. A veterinarian magazine thinks we should engage in a different kind of steralization process. It all seems inefficient and dodges the issue. Other than the feral cat advocates, no one questions the damage done by the ferals. It seems like people just don't want to come down on the side of eradication.

Update 2: These posts have generated so much interest that I've followed it up with another one here.
Posted by K T Cat at 11:43 AM

Unless I missed it, not one of the references you cited made any mention about the various diseases that can be transmitted by ferals. That's the main reason I'm in favor of controlling their population.

I do not believe it is right to kill one species to protect another. If the cats are spay/neutered then they are also vaccinated and have someone feeding and caring for them.
If they are being fed then they are not posing as big problem with killing wildlife like you think.
IMO, the cat in the picture does not look mangy at all.

Cats don't always kill for food, they also kill instinctually. Our Maximum Leader brought in a dead bird last night and she's definitely not underfed. Vaccinations are not permanent. The ferals do get medical care when they're spayed, but not on a regular basis.

I care for a couple of well managed colonies and don't have a big issue with them killing birds. They are more opt to go after things on the ground or butterflies. The vaccinations that are given to feral cats should last 3 years so that they do not have to be brought in once a year at least that is what my vet gives them.

Anon, why do you care for the ferals, who are alien, and not the birds, who are native?

Please note that I said "care for" and not "care about." I do not question the motives of anyone who takes time to take care of wild animals.

I wouldn't say get rid of all of them, but I would say that controlling the population would be beneficial in the same way that hunting is to, say, the deer population. There's a happy medium there somewhere.

"why do you care for the ferals, who are alien, and not the birds, who are native?"

I love and care for all animals...I help all animals in need but I have found that ferals are the most misunderstood and persecuted of all so that is why I work with them. I do not agree that killing is the solution for anything.

The cat pictured is not "mangey" and looks instead to be in good health.

Trap-Neuter-Return is the only long-term and humane solution for reducing feral cat numbers. Catching and killing all these cats now will not prevent anyone else from dumping another unsterilized cat next week. Who is going to pay to re-exterminate over and over? Taxpayers? That is going to cost about $90 a cat versus $25-$30 with a managed TNR program.

An affordable, reasonable, and humane compromise exists and that is TNR.

In any case, it's ultimately the humans who are the problem, not the cats. Thank Europeans for the destruction of native bird habitat. Maybe Europeans should leave North America.

TNR is humane for the cats, but not for the natives. The biggest cost is not financial, it's ecological.

I can't say TNR is humane for cats. When they eventually die - it is probably from something awful - in this case - maybe getting washed away!

Does KT Cat let his own cat out at night???

Check out this site:
www.TNRrealitycheck.com

studies have shown that factors such as insecticide-caused environmental loss of habitat, flying into windows, etc have caused more bird deaths tha cats have.

To answer a few comments above, yes, our Maximum Leader is allowed outside at all times. I want her to live like a cat.

As far as habitat loss, insecticides and flying into windows, those are all problems for the native fauna. Adding ferals to the mix doesn't seem to make any sense at all.

It seems to me that the feral supporters have accepted the death they do not see and don't imagine, that of the local rodents and birds, but are deeply troubled by the deaths that they can, that of the ferals.

You have good hearts.

KT-I'm a feral caretaker. I have 40+ beautiful boys and girls that are all spayed/neutered/vaccinated (TNR'd) that I care for. No managed colony I have seen (and I have seen many) are mangy or go without medical care. And MOST would not still be outside if I had the means ($, time, adopters) to do otherwise. Yet YOU, who lets your cat ouside VOLUNTARILY "to act like a cat" throw stones at the ferals with no choice. You are a hypocrite. You say we turn a blind eye to what they do but what about you? Do you think your cat is innocent? That it doesn't kill anything by being outside? Your cat probably kills for sport. My cats get 2 meals per day as do the birds, raccoons, and fox that come at the same time. They all get along harmoniously. My ferals see birds and rodents all the time and even eat with the birds. They are not predators to them. They do not excite them, they see them all the time. They do not kill for sport. Your precious one is probably doing more damage than any of the managed ferals in your area. I've seen many colonies and have not once ever seen a victim of the ferals--and I look (And yes, duh, there would at least be bones leftover that I would see if they were); I don't want anything like that around (or trash or donated people food) to cause problems for my ferals or the other wildlife. These cats have better things to do and eat. Don't mess with a managed colony. And do your homework. Exterminating colonies just makes sanctuary for new, likely unaltered ones. Try doing something more beneficial--try advocating Spay/neuter or responsible pet ownership instead. read up on TNR. Google Alley Cat Allies. And keep your cats inside. you also should read up on your state law. many states, you feed them you own them. do anything to these managed ferals and you could have a substantial lawsuit on your hands; which if you do I hope hits you hard. These animals have an owner, they likely all have names. they are no different from your cat except they don't kill for sport and they have no cushy home. And they are likely the product of a irresponsible or ignorant pet owner.

for this comment: Adding ferals to the mix doesn't seem to make any sense at all.

Then do something to stop the cause of feral cats, not the victims (yes, feral cats are victims). advocate for TNR, pet spay/neuter, responsible pet ownership. that feral caretaker has taken on a huge, positive responsibility. what you're suggesting is just evil and fruitless. READ about TNR, it works. Time and again it has been proven, because of ignorant (true definition of word not offensive) advocates like you, that eradicating feral cat colonies in no circumstances aids the ecosystem. Feral cats are part of ecosystems. one instance on island (prime instance: http://findarticles.com/p/articles/mi_qn4158/is_20070220/ai_n18622662/pg_2). If they instead did TNR in this situation before there were 2,500 cats this ecosystem would have blossomed. Before you say anything also-keep in mind these cats killed for food, they didn't have a caretaker providing food like those you question do. They incorporate quickly and removing them just causes problems elsewhere. Google too--and you'll see cats have been native to all of North America since the 16th Century.

Whether bones are left or not is not a sound indicator of the destruction caused by cats.

Cats may completely consume what they eat. They may kill the prey and take it elsewhere. If an animal escapes, it more than likely died elsewhere within 24 hours due to the amount of bacteria present in the cat. Cat-injured wildlife seen at rehabs only have a ten percent chance of survival even with administered antibiotics.

Well-fed cats hunt. It is not about sport versus hunger. The hunting instinct is separate from the urge to eat. They will kill - they just may not consume what they kill.

It just makes me sick that someone that allows their cat to roam free to kill wildlife would want to exterminate other cats that have no choice about their circumstances because of irresponsible guardians.
Cats are much safer and live longer lives inside. Some people have no SHAME!

There is more to the planet than cats.

Yep, I'm a hypocrite. My domesticated cat goes out and hunts. However, she does not hunt in a bird sanctuary. If I lived near one, I wouldn't have a cat.

KT-obviously you care to remain ignorant. how sad. at least us feral advocates at least do our research. you obviously have your mind set. why did you even bother to post this for comment? Thank goodness our sins are returned tenfold. You'll get yours.

The cat in the picture doesn't even look mangy to me.

I would like to direct anyone truly seeking knowledge and understanding about feral cats to a link on the Alley Cat Allies site:

I have cared for feral cat colonies for over a decade. My experience with these colonies has debunked many myths I once believed about feral cats.

With compassion,
Darris Bertini
The Write Cause

So kill the non-natives to protect the natives. You racist.