The Feral Cats of the Quivira Jetty

Yesterday, K T wrote about the ecological effects of the feral cats that live on the jetty between Mission Beach and Ocean Beach, within the borders of the San Diego River bird sanctuary. Today I rode out again to see them and this time I brought along the camera so I could show you the way they live. 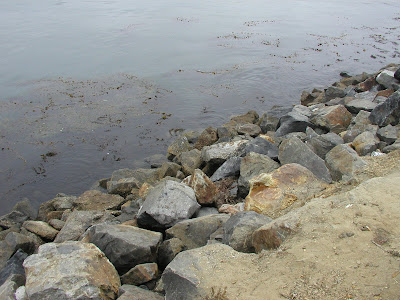 This is what home looks like for the ferals. The jetty is made from granite blocks. Click on the image for a larger version.
Here are six of the cats I spotted today. If you click on the images, you can see the scars and wounds on some of their faces from fighting. 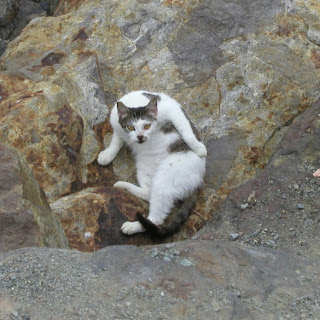 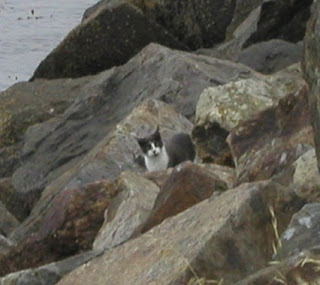 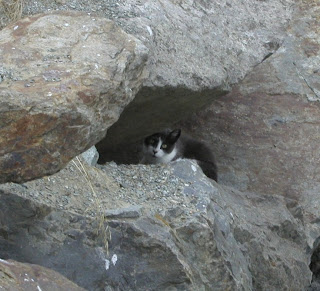 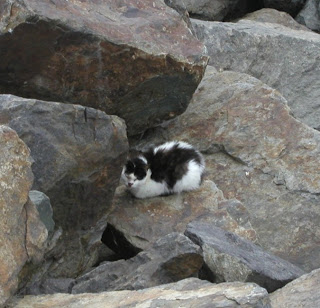 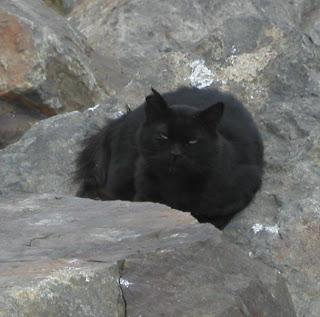 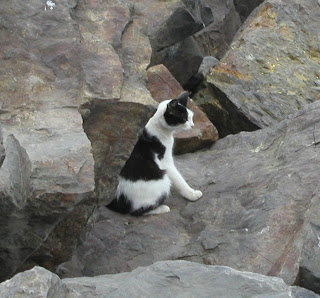 The folks in the area that care for these ferals leave food out for them. 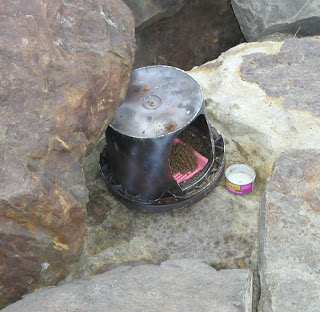 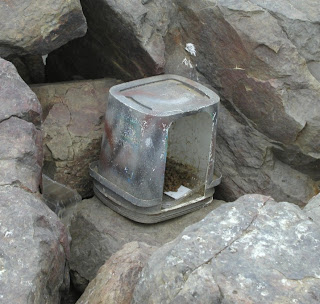 The end result of leaving the food out for the cats is that they live in a much more confined space than nature intended, hence the fighting. The food is pretty scarce outside of these feeding stations, but part of that is due to the predation of the cats on the native species. 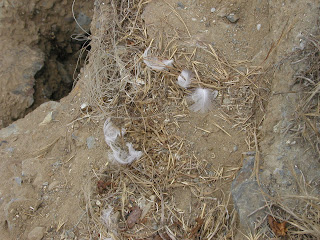 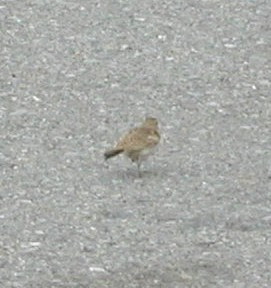 This little fellow is native. I saw two of them on the whole jetty.
The two local birds I saw compared to 6 cats and those were just the ones I photographed. The density of predators makes it impossible for the native species to survive. They're being annihilated by the ferals.

Make no mistake, kitties are fuzzy and cute. But so are little birds and rodents. 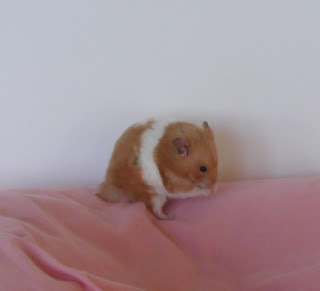 Update: These posts have generated so much interest that I've followed it up with another one here.
Posted by Jacob the Syrian Hamster at 2:26 PM

Yeah, there's something about cats that I don't like, give me a dog any day. And I love wild birds whose deadly enemy is the cat. As I've said before, cats remind me of those pretty girls you'd dote on when younger, only to realise when older that what you thought was an aloof superiority was in reality nothing much going on in the old brain box.

Yes, mice/rats are cute to but carry deadly diseases that kill HUMANS.
Kill the cats and in turn you will be killing us. Also when the cats get spay/neutered that knocks the fight out of them. Their hormones is what causes most of the fighting so there is very little fighting after they have been spay/neutered.
Those cats look very good and in good health. I work at a feral clinic twice a week doing up to 150 cats each time. The cats in your pictures look great compared to what I have seen.

These days, rodents are no more likely to be disease vectors than anything else, particularly because of the hyperinflated predator population that we all keep - cats and dogs.

The natives have been squeezed our by development and are now under attack by ferals. They have practically no habitat left at all and now we have people who maintain alien predators in their midst in higher than normal concentrations.

What does that lead to?

It leads to what most 'do good' because it makes you feel good activities do, unintended consequences that are worse than the original problem. It's the worm in the apple.

So protect the natives at the expense of the aliens. You racist.