Some of my Best Freinds are Canines

Aside: I misspelled "friend" in the title. Since blogspot sets it's URLs based on the title and this post has been linked elsewhere, I can't go back and correct it. Argh!

Our Missionary to the Frozen, Northern Wastelands recently posted about a Mitt Romney story that I, still living in the 1950s, had not heard.

In 1983, Romney's dog made a 12-hour trip from Boston to Ontario in a kennel lashed to the top of the family station wagon...What happened with the dog?

..."Seamus expressed his discomfort with a diarrhea attack. When Romney's eldest son, Tagg, and his four brothers complained about the brown runoff down the back windshield, their father quietly pulled the car over, borrowed a gas station hose and sprayed down both the dog and the kennel before returning to the road."

That does it for me. He should be overwhelmed with shame from this episode. He's now at the bottom of my list for Republican candidates. Well, maybe not the bottom, since Ron Paul is still around, but he's down there. 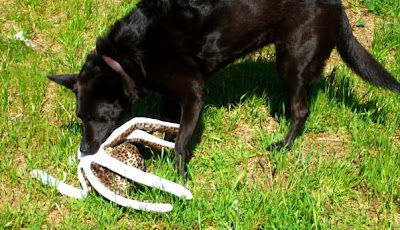 Our Missionary bravely saves us all from a stuffed octopus toy.
While I'm not a dog owner and our Maximum Leader is very uncomfortable in the presence of dogs, I submit to you that for their safety, neither our Missionary to the Frozen, Northern Wastelands nor our Holy Ambassador to the Kingdom of Dogs would ever be allowed on the roof of my car, much less be strapped to it.

Our Holy Ambassador in all his glory.
If you want to look at this from a purely political perspective, this is just another example of how Mitt can be so tone deaf at times. If it isn't thinking that the rest of us will laugh with him at the thought of his dog strapped to the roof his car, it's his radio commercials which have all the weightlessness of Hillary's or Obama's. "If we walk, arm in arm towards the future..." or something like that. I expect childish, vapid rhetoric from the intellectually exhausted Democrats, but from Mitt, I expect a lot more.

You quote an anti-mitt blog as fact? Try and do better next time.

That anti-Mitt blogger has been my friend probably longer than you've been alive. I'm not worried about his sources. In fact, if you visit Hugh Hewitt's blog, you'll see this story being discussed as well and Hugh is the ultimate Romney cheerleader.

Being in a carrier isn't exactly the same as being "tied to the top" of anything.

I've had folks feak out that my dad's dogs-- ranch dogs, for the love of all that's holy-- ride in the back of the pickup.

Are there any pictures of the setup? To know if it was a bad one?