Rest Until You Feel Better

It's been a crazy month and a half or so here in the Catican Compound. Kids going back to college, others finishing summer school, plenty of turmoil at work, volunteering at Catholic Charities, home projects getting done, dinner parties and on and on. I don't know about you, but if I don't get some alone down-time to recharge, I gradually lose steam. Right about now, I'm at this energy level: 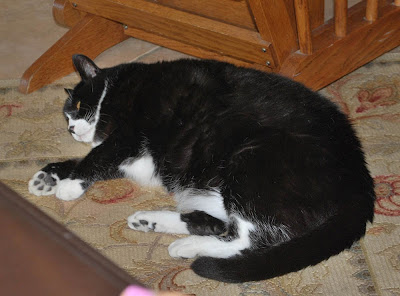 I think one of the reasons I've been so agitated about the way NBC has botched the English Premier League coverage is I had discovered last year that laying around watching EPL games on demand on foxsoccer was a great way to recharge. It was depressing to think I no longer had that sanctuary available to me.

Today we're going to experiment with Jedi Master Ivyan's idea for getting at it another way. In any case, the kids are all off working or at college now (save for our daughter), so a little R&R can now be had. In the past, I'd take it easy until I was barely able to get up and rush to the next task, but this time I think I'm going to lounge a bit longer. Like running around too soon after recovering from a cold or flu, that kind of thing can just wear you out even more.
Posted by K T Cat at 10:40 AM