Sneering At The Goldbugs

... is the theme of this piece by Noah Smith. It's worth reading and the comments are enlightening. Here's tiny tidbit.


If it's obvious that central bank money-printing will drive up the value of gold, why isn't that fact already incorporated into gold prices? In other words, the only central bank actions that should make gold prices rise are surprise actions - like printing even more money than people thought.

Now, Zero Hedge and the whole "goldbugosphere" tries to push the idea that they understand macroeconomics better than everyone else out there - that what is "obvious" to them is not obvious to most of the world, which is still in thrall to (Keynesians, neoclassical econ, Xenu, take your pick).

The problem with this line of reasoning is that it assumes a continuous model of the economy and that there are no inflection points where the equations and/or constants change in a discontinuous fashion. I would argue that just such a discontinuity occurred when we began to monetize debt at the $1T+ rate. As far as I know, we've never done that before, at least not over a prolonged period of time and nations that have done it in the past have all come to ruin.

In the comments are links to a trio of regression charts showing the linkage between M2 money supply* and the price of gold. For some reason, the machine I'm on isn't opening them, but here's a similar chart from Uncommon Wisdom. 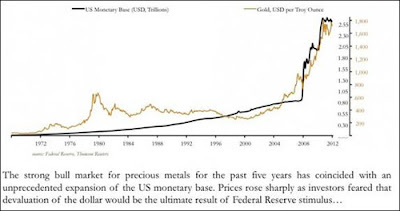 There's definitely an inflection point and a correlation after the inflection point. Before the inflection point in money supply, I wouldn't take any bets on a linkage. To me, that says there are two distinct models of the economy at work, one pre-monetization and one post-monetization. That's exactly what you'd expect from looking at the history of other countries who've tried the same thing - late Bourbon France, the Confederacy, Weimar Germany and recent Zimbabwe.

I'm still not a fan of gold, but I'm certainly not going to sneer at those who are.

* - M2 is the amount of money in circulation in notes and coin plus non-interest-bearing bank deposits, building-society deposits, and National Savings accounts.
Posted by K T Cat at 8:40 AM

How can it be "priced in" when global central banks are committed to unlimited money printing, and yet the average investor, both individual and institutional, still has approximately 0% allocation to gold?

Wouldn't it be prudent to have a 5% allocation just in case?

The lack of more serious inflation does deserve investigation by Austrians and gold bugs but I don't think they lack hypotheses. E.g. we're exporting inflation to china etc, manipulation of the inflation data, all the big money managers are keynesians. Also, as the Austrian school stresses (vs. Monetarists) inflation has a particular path through the economy and doesn't spill into every sector uniformly. A lot of it is going into bonds and other "safe" investments. Lastly, with regard to gold, besides the keynesian denigration as a 'fetish', there's the high probability that if gold spikes the government will do something to curb "excess profits" and "speculation", whether that be a targeted sales tax, confiscation, etc. We've already seen a new tax on miners in Australia, new gold import controls in India and some mine nationalizations in the last few years. Add to that the fact that the paper gold market is suspect. Who wants to buy a bunch of gold when you're pretty sure the government is going to screw you if you're right. Only those wanting to insure against general financial collapse.

Thank heavens for gold haters. They are the ones I'll sell mine to when the time is right.

WC, the pricing in argument made no sense to me, either.

Are they also sneering at the central banks who are buying record quantities of gold?

WC, he doesn't address that at all. Central bank buying would seem to wreck his "pricing in" argument altogether.