Sterilizing Bond Purchases With What?

Mario Draghi, head of the European Central Bank (ECB), is promising to stop the rise in interest rates for Spanish and Italian bonds by buying unlimited numbers of them in a sterilized process. Sterilized bond buying means that no money will be printed by the ECB; for every Euro of Spanish bonds bought, the ECB will sell a Euro of something else to raise the funds necessary for the purchase. They'll get low interest rates for the sovereigns and no inflation.

But what will they sell and to whom?

Taking Spain as the example, unemployment is over 20%, there's a slow run on their banks underway, provinces are going bankrupt or insolvent, the list of problems goes on and on. There's no indication that the government of Spain will be able to service its debts in the future unless its interest rates are cut in half or more. Investors know this. As soon as the ECB puts their plan into action, they won't just be buying new issuances of Spanish debt, they'll have to buy from current bondholders who want to sell, otherwise the whole thing will fail.

As soon as nervous holders of Spanish bonds find the ECB is willing to buy their paper, they'll sell it. There's a lot of the stuff about and lots of reasons to be nervous. So just what is the ECB going to sell in order to cover all the Spanish bonds they'll need to buy?

My bet is that they're anticipating no such rush to the exits with the Spanish debt. As soon as bondholders know there's someone out there who will buy if they need to sell, everything will calm down. If it were me, I'd nod my head and say, "Well that's good enough for the other fellow, but I'm getting out. The wheels are still coming off this thing and I don't want to be around when it really crashes."

I just don't see how this ends without the ECB revving up the printing presses.  The underlying facts haven't changed - Europe's business climate is dreadful, their labor is overpriced and unreasonably protected and they're way over the heads in debt. The ECB has to buy the bonds with something, but with what? 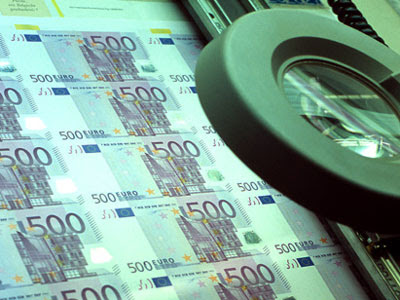 By lunch we ought to be seeing the "Markets Down on doubts of EU stimulus measures" headlines....


Hello friend
How are you Today Visit your Web Blog Page Got more Information you share Best Information my pray with you and Your Business get more success and Blessings in The name of LORD.