Welcome to this week’s World of Good (WOG) post here at The Scratching Post. Today we celebrate the Special Olympics. The purpose of the WOG is to highlight and honor acts of kindness and charity because good deeds are contagious.

On Saturday I went to the San Diego Special Olympics event at Point Loma Nazarene University (PLNU). It was one of the most surprising and enjoyable things I’ve ever done. I heartily recommend working with them in your town.

I've taken a couple of runs at writing this post and I've decided to let the pictures tell the story. I took over 100 photos and had a hard time culling them. This is going to be a long post. You can click on all of the pictures to get bigger versions of them. Do it, it's worth it.

The first thing I noticed about it was that the majority of the volunteers were not related to the athletes. They were people from all walks of life who came to help out. First, there were the students of PLNU. PLNU is a Christian university affiliated with the Church of the Nazarene.

Here, some of the students run the registration table. The student who organized the event told me she started working on it a month in advance and put a couple of days a week into it. That's no small task when you're a full time student! 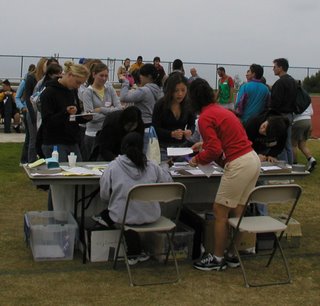 Another group were the local Kiwanis clubs. They provided a large number of volunteers as well. 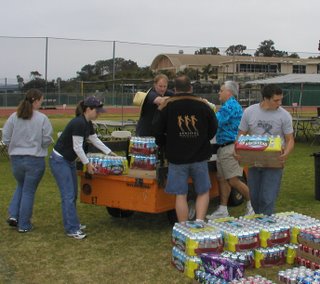 An army travels on it's stomach. So do athletes! You can see what a gray and murky day it was. I chose not to use the flash on my camera because I wanted candid shots. Many of them came out a bit dark, but if you click on them and look at the larger versions, the details come out better. 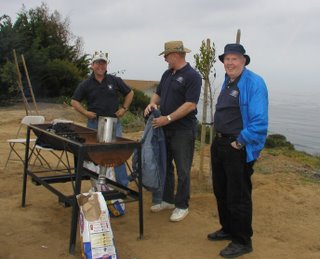 The athletes began the event with a parade around the track while the Olympic anthem was played on loudspeakers. They were organized into teams based on where they live. Another thing that struck me was how happy and enthusiastic the athletes were. Their joy was infectious. 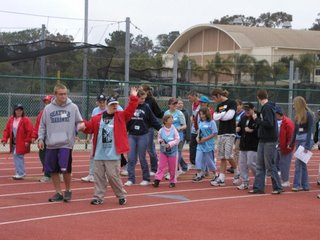 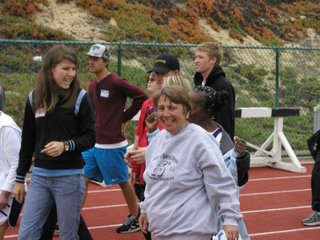 After the national anthem was played, one of the athletes recited the Special Olympics Oath. "Let me win. But if I cannot win, let me brave in the attempt." 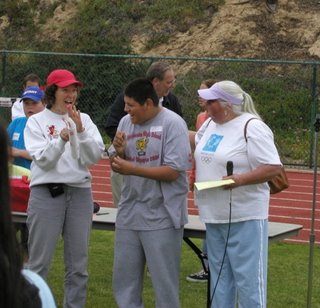 Finally, there was a torch ceremony where the Olympic torch was carried around the track by various athletes. 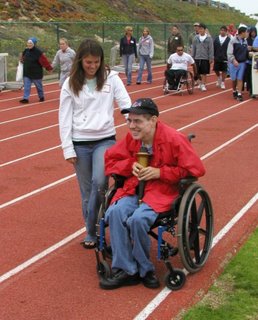 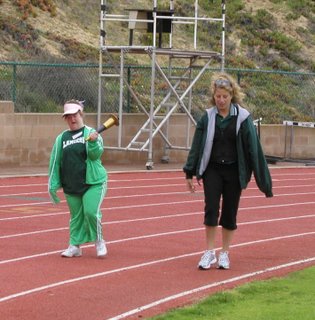 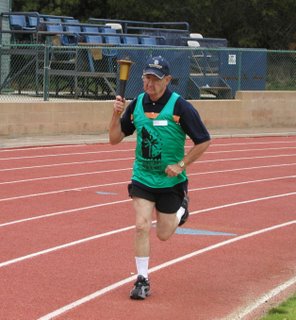 The Olympics featured several different kinds of events. One of my favorite sequences of photos came from the standing jump. Here, the woman "calls her shot". I think she was telling everyone how far she was going to go. 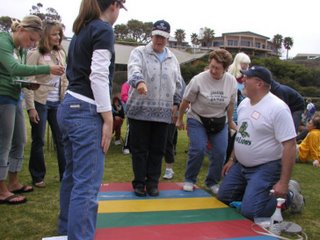 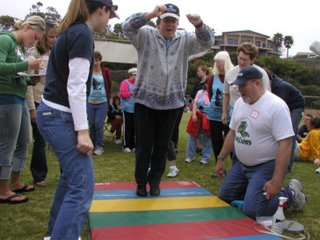 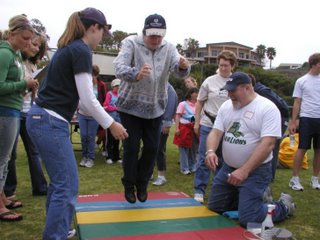 The team coaches came from all over. Many of them were high school PE coaches. Here, a runner gets some last minute tips before his race. Did they help? 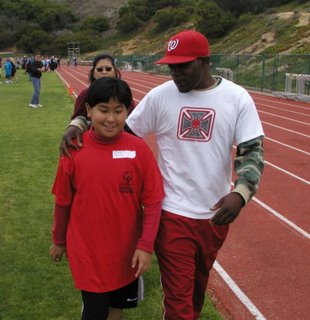 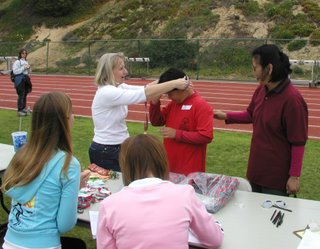 His mom was really proud. 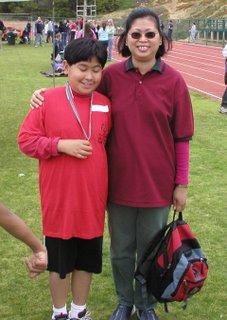 The PLNU students acted as chaperones, counselors, cheerleaders and support staff. There must have been almost a hundred of them. It was a beautiful thing to see.

Time for a pep talk. 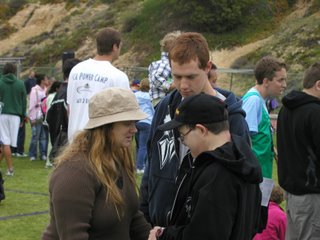 One athlete gets a massage. 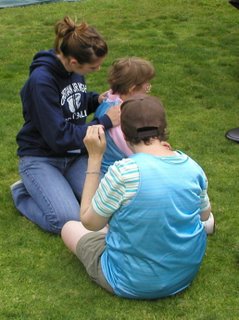 I went to college. I don't think I was ever this cool, though. 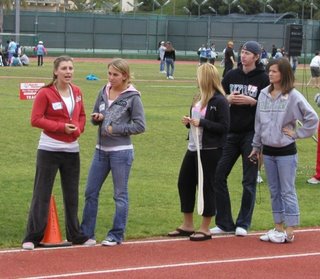 An olympian and student ham it up for the camera. 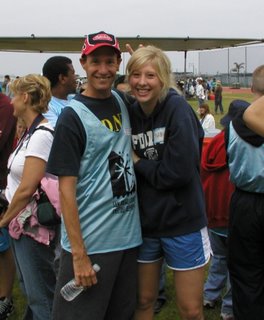 The athletes were really into the competition. While I was walking between events, one of them told me how hard she had been practicing. I got some candid shots of the athletes comparing their performances and discussing what they could have done better. 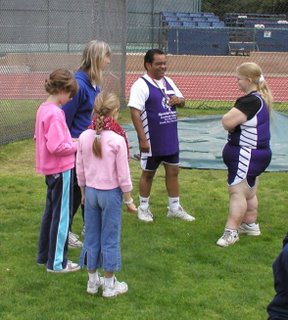 This guy was totally focused on the shotput competition. 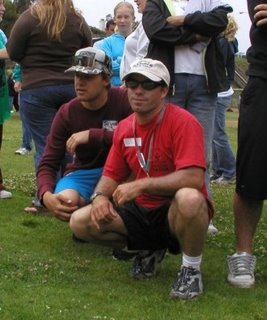 The shotput competitors were impressive. Dig these two. 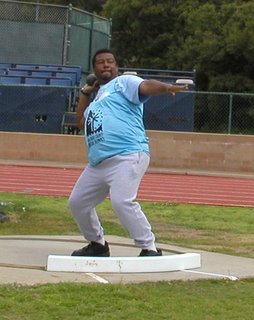 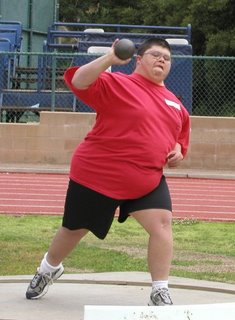 I want to close with one last photo that captures the spirit of the event. A PLNU student who could have been studying or socializing, but this weekend was giving her time and affection to a determined athlete instead. Words fail me. 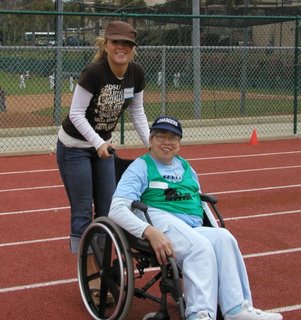 I have to admit that there were a couple of times I got choked up during the event. I stopped and tried to take it all in and it dawned on me that this was America. People pitching in and helping each other, making it a great day for some very special Olympians. Thanks to all of you for memories that I will always treasure.

Thanks also to the WOG Squad for their links and support. Check in on The Scratching Post this weekend to see their blogs highlighted with our weekly This Week in the Theocracy post. If you want to participate in the weekly WOG with stories or links or just want to be notified when they are posted, please send me an email at ktcat -at- san.rr.com.

My mom has volunteered for Special Olympics before and found it to be extremely rewarding.

Thanks for sharing your experience!

Thanks for posting this photo documentary. What a win-win situation for all involved.

Lovely and so inspirational!..I used to teach Special Ed...beautiful images u captured KT!

Been meaning to comment earlier...Wow! Another wonderfull WOG post. Great photos and great story. You are very good at this!

I coach special olympics swimming and have been since I was fifteen years old. It's an amazing experience. Truly one of the highlight's of my week. I learn so much from the athletes and they are truly people to be treasured. Though sometimes challenging, it is always a joy to work with special olympics athletes. My sister swims with special olympics and she is going to the national summer games. Participating in the Special Olympics program has helped her develop a healthy sense of self in a society in which she is marginalized because of her disabilities.