Or is that "Moron Blog Advertising?"

There's one place where the print media has an advantage over bloggers and that's advertising. A recent post about Adsense posting ads for hair loss was a joke, but that and a comment from Zeus the cat touches an essential truth. Advertisers are scrambling to find what works on the Internet.

[Digression]Congratulations are in order for Zeus and his human. She just took the GRE and did quite well. Outstanding![/Digression]

In the newspapers, advertisers pay to be seen. If this were a newspaper, I would earn money for simply hosting the ads you see above and to the left. It wouldn't matter if you read them or clicked on them or if they lead to any business. I would still get paid. In that model, it's the advertiser's problem if the ads don't work.

On the Internet, where results can be measured much more accurately, we only get paid when someone clicks on the ad. Having seen the results from my Adsense effort over the last few weeks, no one clicks on these ads. Even on days of huge traffic, like when that troglodyte, Patriot Boy, linked to me and thousands of his unwashed minions tramped across my site, all I got was a distinct need to shower. No clicks on the ads.

In the newspapers, the measurement of advertising success is much more indirect. A company runs an ad campaign and then weeks or months later examines their sales. Cause and effect is murky because in those intervening weeks and months, any number of other factors could have led to sales fluctuations. With bloggers, they can cut through the fog and see exactly where buyers are.

There are a few ad companies that pay on the old newspaper model, such as Blogads, but they don't seem to have the client list that the Pay Per Click (PPC) groups have. Blogads spots are often found empty, waiting for buyers.

I've spent a lot of time reading other blogs about how to make the advertising pay and in essence, you have to attract a readership that is shopping at the same time they are reading your blog. At least then they are interested in the ads at your site. Social, political and pet blogs don't seem to attract that kind of clientele.

Another blogger even used posting pictures of hamsters as an example of what not to do if you wanted to earn money on a blog.

Oh well. What can I say? I'm just a really photogenic guy. 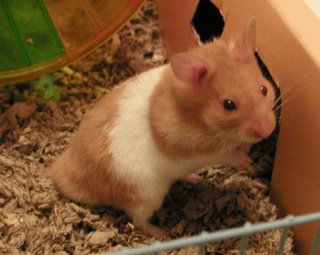 Posted by Jacob the Syrian Hamster at 6:07 AM

As someone who tried Adsense myself, I can say with complete confidence that it is not worth it. Companies that are using Adsense as a means to promote their products are not companies that someone would consider successful. Typically, these are companies who are just starting out who are branching into the advertising scene and are possibly looking for creative and economical outlets.

Consumers who do not automatically recognize a company's name are not going to click on a link no matter how flamboyant that ad may be. So put those two facts together, and you end up with the conclusion that Adsense is horrible as a means of making a profit off of one's blog. Better options exist, but they do require some amount of investment (even if small) from the one wishing to make the profit. Bloggers need to weigh the cost versus the profit to see if it truly is worth advertising products on their site.

Wow! I had never thought of this. That is really insightful. Thanks!