This essay is a perfect example of why I'm going to let my Wall Street Journal subscription lapse. It's awful and never should have made it past the editors.

As COVID-19 spread earlier this year, governments introduced lockdowns in order to prevent a public-health emergency from spinning out of control. In the near future, the world may need to resort to lockdowns again—this time to tackle a climate emergency.

And we're done. That's the blog post for today. Unbelievable stupidity posted at Market Watch, which is part of the Dow Jones family of publications.

If You Want More Details

Here's the problem with the article. Scale*. Global Warming Climate Change is a global, long-term phenomena. If you're going to fight it, you will need to fight it globally with long-term solutions. Local or even national lockdowns, like California's idiotic move to "renewable" energy that resulted in massive blackouts, will accomplish nothing. China, India, Indonesia, Africa and South America will see to that.

Second, it's a response that's doomed to fail because no one will be able to stick with it. Back during the 2008 economic crisis, some European countries tried to implement weak-tea austerity programs because their budgets were way out of whack. The populace couldn't stick with it long enough to make a difference because it was painful, so back they went to spending more than they earned.

The essay goes on to pitch the standard Marxist fantasies of paying nurses and teachers more than lion tamers and USMC snipers. Or something like that. Frankly, I lost interest pretty early in the thing. After the first three paragraphs, everything was predictable and what you'd expect from a hysterical high school student who had been thoroughly indoctrinated by the teacher's union. Which is to say, most of them.

Sometimes you just have to live with the world the way it is and make the best of it. 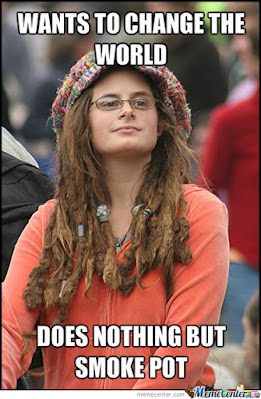 "Second, it's a response that's doomed to fail because no one will be able to stick with it."

Yes, exactly. The only way to get people to move away from activities that emit CO2, is to come up with other approaches that are cheaper, or create markets for the CO2 produced it so that you can get rid of it without having to pay to do it. Otherwise, no matter how hard you try, somebody will keep up with the old approach simply because there is a buck in it.

Trying to appeal to people's better nature to get them to "do the right thing" is not particularly successful. But if there is a buck to be made in the process, that changes everything.

If I remember my third-grade science, photosynthesis (the process by which plants generally produce the energy they need to live) uses carbon dioxide and produces oxygen as a byproduct. Maybe plant more trees? Especially where they're being taken down to build windmill farms? That would be the science thing to do.

I just saw an article on vertical farming. My biggest worry with climate change would be the devastation to our agriculture sector, but if we can solve that with vertical farming and similar notions, we'll get through it.

Tim, here's a big thing for me: When I go into my kitchen, I flip a switch and even here in California, the light (usually) goes on. Who wants to tell Mr. Mobutu in Nigeria he can't have that, particularly at the hospital where Mrs. Mobutu is having a c-section?

If you want electricity, chances are pretty good there's going to be some CO2 produced. I doubt Mr. Mobutu will be swayed by telling him that Barack Obama's beach house will be threatened by a rising sea level.

One Brow, devastation to agriculture? Why? Warmer temperatures mean more agriculture closer to the poles. At worst, it moves the map of arable land around a little bit.

And no, I don't believe all that nonsense about weather extremes. The predictions have failed so many times that their credibility has been shot. The forest fires mentioned in that execrable article weren't caused by Global Warming, err, Climate Changed, they were caused by terrible forestry policies. I live in SoCal and I promise you, that's the problem. We all know that no fire this year means bigger fires next year unless we clear out the fuel. The problem compounds every year.

John, thanks for the visit and the comment! I'm all in on planting. Next year, I'll be back to tobacco and perhaps some okra and collards.

Warmer temperatures also put more water in the atmosphere overall, and change how that water is distributed so some previously wet areas none-the-less get droughts. There are changes to ocean currents. It's a rather complex planet we live on.

I'm not aware of any failed predictions. I am aware of some attempts to manipulate genuine predictions, or confusions of popular media with scientific predictions, or just stuff that is made up and presented as predictions (for example, once a scientist produced a graph that included what would happen if there were a huge volcanic explosion in addition to the human activity, and the denialists would compare that graph to our current experience, where there was no vocanic explosion).

By the way, I do agree about the terrible forestry policies.

Fortunately for Barack Obama, his "beach house" is a few dozen feet above sea level.

You are correct that developing countries are going to want our luxuries. However, since we are the world's leading contributor to carbon emissions (or, perhaps second to China), what we do matters more than what Nigeria does.