What Happens When You Don't Know How Anything Works

Well, that was the worst possible outcome to the election. Trump won, but a couple of key states, where Trump was ahead substantially, stopped counting ballots in the middle of the night and then suddenly found lots more ballots. The details were reported by a news media that has proven itself totally untrustworthy.

In a deeply divided, heavily armed country, we used the least reliable method of voting and informed people of the results with a completely unreliable press. You'd have to be either a total genius or an Ivy League idiot to have come up with this.

It's nothing new, however. The Elites thought they could accuse cops in their cities of being racist thugs. When the cops walked off the job, the Elites thought that the black neighborhoods would behave like the characters in their favorite civil rights movies. "But Mr. Johnson, I just want to be the best badminton player I can be," says the young black man in a suit and tie, standing in front of the white, Southern, racist coach. When crime spiked, the Elites wondered where the cops went.

And the whole time, the news media told you it wasn't happening.

Then there was the way the tech giants and the news media hid the Hunter Biden influence-peddling scandal. It didn't happen and it wasn't a big deal anyway that it did. Also, shut up.

So here we are, with an election result that will most likely go to the courts and one side will never trust, all because the Elites, who barely know which end of the garden hose to screw on the spigot, thought they would fight white supremacist leprechauns and a virus with mail-in votes that are utterly untrustworthy.

My own mail-in ballot required only my signature on the back, a signature that no one will check. This is all trash. No one has any idea who really won.

Way to go, idiots. The only solution I can think of is separation. The sooner we split up into Eliteland and Normalland, the better. What we have right now is total madness.

Update: Dig the vote harvesting in Wisconsin. This is a total scam. Derek Duck on Twitter has a great thread on the topic. 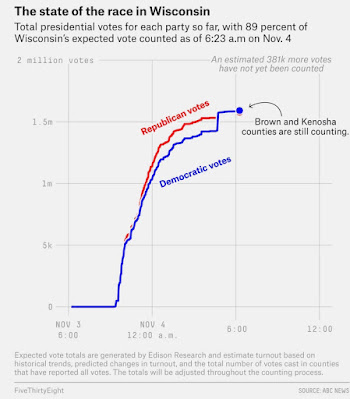 It doesn't matter any more what is true because no one can trust anything.

You know, our attitude to close elections have always bothered me on a fundamental level. When an election is so close that a couple of votes either way would push the total one way or the other, everyone goes on about who is "really" ahead and who "really" won. But when we are looking at less than a 1% difference, it ceases to be a reflection of what the electorate wants. Instead it becomes a matter of random numbers, and running the election over again would most likely flip the results. All this shows is that overall, half the people want one candidate, and the other half want the other. Clearly, neither candidate has an argument that a clear majority finds compelling.

In cases where it is so close that who wins depends on whether Grandma felt up to getting to the polling place today, or whether the tabulators can read a ballot clearly or not, we'd be better off flipping a coin. It would be more honest. If half the electorate wants one thing, and the other half wants another, it's going to come down to random happenstance anyway, and we might as well admit it.

When Mike Coudrey says that there are only 3,129,000 registered voters in Wisconsin, that does not in fact appear to be true.

According to https://elections.wi.gov/node/7220 (the site maintained by the Wisconsin elections commission), the actual number of registered voters as of November 1 was 3,684,726, a bit over half a million more people than Coudry is claiming.

It looks like his source was https://worldpopulationreview.com/state-rankings/number-of-registered-voters-by-state, which is some sort of aggregator site that is using data they got from the Census, and is likely to be significantly out of date.

He deleted that tweet, so I removed it from the blog. It still plays into my original point. In a nation so divided, you should move towards more trustworthy systems, not less. There will be all kinds of wild rumors, some true, some false, but they will all be believable because the news media and big tech have all been in the tank while the Democrats put in place the worst possible voting scheme.

It doesn't matter what's true, it only matters what people will believe.

Here's the fundamental problem: When you get conflicting data sets, which one do you trust? The press lied about the Russia Hoax, the Fine People Hoax, the Covington Catholic boys, the Bidens' influence peddling and more. All of the lies went in one direction, as have the censorship efforts from Twitter, Google and Facebook. I now have no source for reliable election results because the media is dishonest and the votes are untrustworthy.

What do you do when you know nothing for certain?

How was it that the people who engineered this didn't see it coming? Being benevolent, I guess their bubbles were that thick.

So, speaking of what people will believe:

- The Republicans have been claiming all along that there would be shenanigans with the mail-in ballots. They have, presumably, been *watching* for any evidence of such.

- The Wisconsin Elections Commission is composed of 3 Republicans and 3 Democrats, their entire legislature is heavily dominated by Republicans, and the police forces are reputed to be more sympathetic to the Republicans. While the governor is a Democrat, most of the state bureaucracy was put in place by his predecessor, a Republican.

- And yet, in spite of the Republicans being both forewarned and in an excellent position to keep an eye on things, I am supposed to believe that the Democrats have nevertheless pulled off a major election fraud right under their very noses? And the Republicans aren't even able to bring out the (Republican-leaning) police to make any arrests?

There are only a few possible conclusions I can reach from this:
a) The Republicans are, by their own admission, screamingly incompetent and completely unable to keep the Democrats from running roughshod over them; or
b) The Republicans don't actually want to have fair elections or arrest anyone for fraud, because they have been doing the same kinds of frauds themselves and just didn't pump up their numbers enough; or
c) It's all lies, and the election actually proceeded pretty normally.

Just speaking from my own experience in CA, I don't understand what it is you would "watch" with mail-in ballots. That's the whole problem. I can't figure out how you would establish provenance.

Is that the right word? Anyway, I wouldn't be surprised if my ballot had been discarded because someone else filled one out in my name and mailed it in as well.

I recall seeing someone else say that several European countries had played with mail-in voting, but found it so rife with fraud that they discarded it.

If Trump wins, the Democrats would be perfectly within their rights to scream about voter fraud by the Republicans.

=="It doesn't matter any more what is true because no one can trust anything."==

And that is a deliberate aspect of leftist strategy.

Ilion, I don't agree with that. I maintain that their strategy is "by any means necessary." In their eyes, they are fighting the devil. We're racist, sexist, homophobic bigots. Against such foes, there is nothing you won't do.

It's almost like we're dealing with jihadists who are unencumbered by the strictures of the Koran. Hmm.

Oh well. I'm drinking a beer after a long day at work. My window is open and I can hear the girl next door playing outside with her friend. The beautiful sound of feminine laughter cascades through my window. All is well and will be until it's not.

C'est la vie, or however the frogs say it.

Don't confuse the "useful idiots" for the strategists.

For anyone that thinks there isn’t lots of opportunity for fraud with the mail in ballots here’s one data point.

A friend (and his family) moved from CA to Tennessee about 18 months ago. Was never a CA mail in ballot voter. Registered in TN. Low and behold, the post office delivered two CA mail in ballots to him and his wife at their TN address.

The only thing that stopped them from filling them out and mailing them back was their own morals.

You decide what the lesson is.

Also, don't forget that even when a person has "convinced" himself that he believes what he knows to be untrue, underneath all the rationalizations, he still *knows* that it is untrue.

The *reason* that the "useful idiots" get so violent when we speak the truth -- or even merely breathe -- is because they *know* that they "believe" lies.

The Republicans have been claiming all along that there would be shenanigans with the mail-in ballots. They have, presumably, been *watching* for any evidence of such.

You mean like the multiple news reports-- mainstream news reports-- of ballots found in ditches, and in trash-cans, and people showing up to vote early and being told they'd already voted by mail?

The same kind of evidence that got mainstream Democrats to start telling their people to vote in person, towards the end?

A friend (and his family) moved from CA to Tennessee about 18 months ago. Was never a CA mail in ballot voter. Registered in TN. Low and behold, the post office delivered two CA mail in ballots to him and his wife at their TN address.

Washington state only finally stopped mailing my husband ballots this year. We fought with them for YEARS, but...we were in the Seattle blob, so we got the ballot if we wanted it or not. He moved to Texas before the previous presidential election. (I moved to the dry side before following.)

That same area of Washington routinely has very high voter turn-out, compared to the dry side where they actually moved me to the inactive listing when I informed them we'd moved, as they are legally required to do.