The Economy Is Already Open

Here's the parking lot at our local Home Depot. 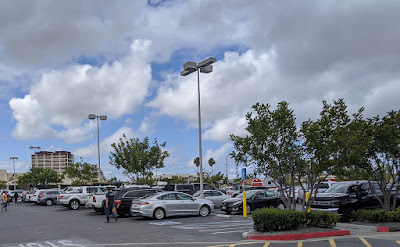 Two weeks ago, it was practically empty except for rebels like me.


Check out the reply thread on this tweet by Governor Newsom hectoring everyone to stay indoors.

If you start thinking of viral spread as a network model, you can quickly see that since you are coming in contact with everyone the people at the grocery store have contacted and so on, this quarantine thing is o-v-e-r, over unless you take strong measures. You can still control your contacts and stay almost as safe as you like, but the rest of us have thrown in the towel.

Reading Twitter reply and blog comment threads, it's an interesting comparison between left and right. The left wants guarantees and the right wants freedom. It's not a matter of good vs evil, it's just a different set of values. I'm not including the race-crazed progs or their white nationalist clones here.

Right wing extremists argue in favor of letting people make their own risk calculations. Left wing commies don't want others to increase their chances of getting the Chicom Flu. Both positions make sense. It's just two different sets of values.

In any case, this lock down thing is over from a virology point of view. All we're doing now is spending money we don't have and wrecking the lives of poor and middle-income people to no effect.

Side note: Our next-door neighbors had a pool party for some kids yesterday. Gavin Newsom was not invited.

Super Special Extra Side Note: When you realize that the economy is already open from a risk point of view, popping over to the news media to see what the Elites are saying is a surreal experience. None of what they're saying, save for those in favor of opening businesses, makes sense or even has any contact with reality. As usual, the Elites are simply talking gibberish to each other in their gated communities, isolated from the rest of us.
Posted by K T Cat at 6:42 AM

"Reading Twitter reply and blog comment threads, it's an interesting comparison between left and right. The left wants guarantees and the right wants freedom."

That rather blows up one of their favorite narratives about themselves and about us.

Saturday, it was time to get the crab-grass preventor. Anytime I've gone past the Menards (Wisconsin Home Depot), has been packed with cars. And reports are they are a madhouse. I decided that I didn't want to face that. Thinking that going late in the evening just before closing might be the thing.

But I didn't plan ahead. It was 11:30 on Saturday, and the decision for the day was made. So I went to a local ACE Hardware chain. I think it was worse. They had rows blocked pretty much funneling people all together.

If more "non-essential" stores were open, people would being going to different places, making it easier to not crowd together.

Right wing extremists argue in favor of letting people make their own risk calculations. Left wing commies don't want others to increase their chances of getting the Chicom Flu.

I have had so many annoying conversations that boil down to:
"Give people good information, they know more about their situations and can make the best informed decisions."
"But look at that beach, people make the WRONG choices!"

Which quickly devolved into the virus having the characteristics of:
striking down the young and old like crazy,
spreading insanely quickly while you can't see it,
and yet also people having it and never knowing they had it that never got to the point of admitting that at least half of folks never got a symptom, much less got sick.

Suggestions of protecting the vulnerable-- you know, like my family has been doing since youngest daughter was born with a collapsed lung-- somehow always generated irrelevant comments about buying a tour of Italy or not using modern health care because I don't believe in viruses. (????)

"Reading Twitter reply and blog comment threads, it's an interesting comparison between left and right. The left wants guarantees and the right wants freedom."

That rather blows up one of their favorite narratives about themselves and about us.

They're not using "freedom" the way that we do.

I was talking about the narrative according to which conservatives are hide-bound, fearful, afraid of change/novelty, naturally gravitating to someone who will control us and promise us safety, etc, and "progressives" have "good" characteristics the opposite of all of our "bad" characteristics.

I see the basic differences as those on the left always talk about what's "right" and "fair" (which actually mean what makes them feel good), while the right tends to talk about "right" and "fair" (actually meaning that which is true and logical). That, to me, means the basic difference is that those on the left think more with their emotions (the primitive brain and endocrine system) and those on the right use more of their logic (the frontal lobes).

It is tempting to draw parallels between what Kahneman calls the Type 1 and the Type 2 thought processes (see "Thinking Fast and Slow" by Daniel Kahneman). In his opinion, based on much study, Type 1 thinking is fast, intuitive, unconscious thought and is easy but very susceptible to bias, while type 2 is slow and requires conscious effort but is much more resistant to cognitive biases (although certainly not free/immune from them).