Looking For Your Regulations In Shining Armor

... is what a modern woman does. No more relying on a man for strength and protection, no way!  Instead, we've got Section 67386 of the Education Code. Below is an excerpt.


67386. (a) In order to receive state funds for student financial assistance, the governing board of each community college district, the Trustees of the California State University, the Regents of the University of California, and the governing boards of independent postsecondary institutions shall adopt a policy ...(which) shall include ... the following:

This is so much better than the old days when the patriarchy oppressed women! I mean, just look at the injustice in the picture below, taken from a popular 1920s book series of instructive children's stories, My Book House. 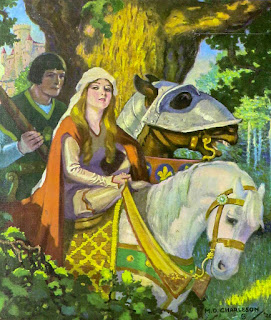 It's nearly impossible to count all the ways the painting reinforces the subjugation of women! Here is just one aspect of it.

The man, armed and armored, is pledged to his lady's defense. That is, if she is threatened, he is willing to fight, suffer, bleed and possibly die for her sake. If that isn't male dominance over women, I don't know what is!

For her part, the lady is lovely, elegant and refined. She accepts and respects his protection and enforces rules of chivalry upon her knight through the bestowal her approval. Her approval does not include doing the horizontal monkey dance until marriage, which, as we all know, is practically equal to slavery. She might as well be in chains in that picture.

No, it's a grand thing that we've evolved past those warped notions of "masculine" and "feminine" roles. How can the midgets of pre-post-modern literature ever compare with the soaring beauty of the California legal codes?


(4) A policy that, in the evaluation of complaints in the disciplinary process, it shall not be a valid excuse that the accused believed that the complainant affirmatively consented to the sexual activity if the accused knew or reasonably should have known that the complainant was unable to consent to the sexual activity under any of the following circumstances:

(A) The complainant was asleep or unconscious.

(B) The complainant was incapacitated due to the influence of drugs, alcohol, or medication, so that the complainant could not understand the fact, nature, or extent of the sexual activity.

(C) The complainant was unable to communicate due to a mental or physical condition.