Man, this guy is good.


Pope Francis, as part of his week-long trip to Brazil for World Youth Day events, today visited one of Rio de Janeiro's shantytowns, or favelas, a place that saw such rough violence in the past that it's known by locals as the Gaza Strip.

Despite heavy security and a cold rain, Francis waded into the crowds without an umbrella and hugged and kissed residents young and old before heading into the shoebox of a church that serves the Varghina community. There he blessed a new altar.

As a Catholic, he inspires me tremendously. I want to be like that. He's made me strive to be better in all kinds of ways, even the way I work with my employees. 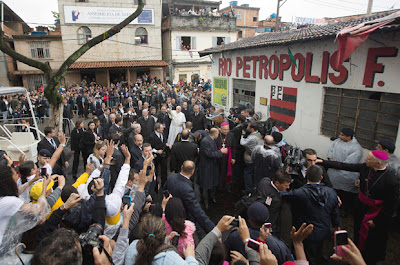 Here's a little more from the source of that image.


RIO DE JANEIRO — They are some of the most dangerous, most crime-ridden places in the world, where even the police and army fear to tread.

But yesterday (Thursday), in one of the most highly symbolic events of his week-long trip to Brazil, Pope Francis ventured - on foot - into one of the country’s notorious favelas, the slum-like shanty towns that sprawl around its big cities.

The 76-year-old shunned the bullet-proof Pope-mobile normally used for such visits, instead walking around the Varginha favela, a poverty-stricken community in an area of Rio nicknamed the “Gaza Strip” for its drug crime, violence and gang warfare.

He went there with a message to Brazil’s poor and oppressed - not to give in or despair in their battle against the “evil” of corruption.

I'm not Catholic, but I like him a great deal. His humility reminds me of Christ. I was almost hoping we'd catch a glimpse of him when we were in Rome recently.