The Catholic Diocese Of San Diego Is Utterly Worthless

San Diego Unified is the latest school district to adopt the principles of academic queer theory and translate them into K-12 pedagogy, with the ultimate goal of dismantling “heteronormativity” and promoting a constellation of new sexual identities, such as “genderqueer,” “non-binary,” “pansexual,” and “two-spirit.”

I have obtained a range of publicly accessible documents from San Diego Unified that reveal the district’s new ideology. The materials follow the basic premise of queer theory: white Europeans created a false “gender binary” and used the categories of “male” and “female” to dominate racial and sexual minorities. A San Diego Unified training for facilitators of LGBTQ student groups argues that this system of “heteronormativity” forces students to conform to these norms: they are “assigned” a sex at birth, pressed into the identities of “man” and “woman,” and expected to have heterosexual relationships culminating in “marriage (and kids).” This “gender binary,” however, is arbitrary, socially constructed, and harmful. It is, in the words of the presentation, a “limited system [that] excludes and oppresses trans, nonbinary, intersex, and gender-nonconforming people.”

Now dig these results from this morning. 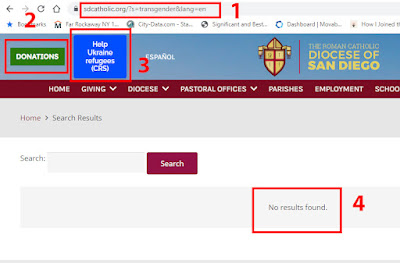 A search (1) on the website for the Catholic Diocese of San Diego turns up the following:

The San Diego public education system is eagerly feeding our kids into a sexual-insanity meat grinder and the Catholic Diocese of San Diego has its hand out for money.

I never swear in prose because I think it's lazy. As my own, "transgender" daughter spirals into insanity and probably from there into death from wrong-sex-hormone poisoning, I am sorely tempted.

I can't think of anything else to write.